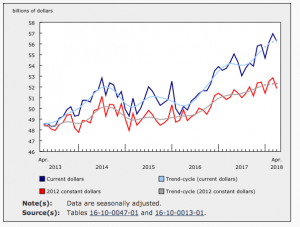 Economists had expected an increase of 0.6 per cent, according to Thomson Reuters Eikon.

“Not only did sales pull back significantly, contrary to expectations, the decline was not at all a price story,” Dolega wrote in a report.

“In fact, volumes were far more disappointing than shipments measured in current dollar terms which effectively wiped out the March gain.”

Statistics Canada said sales fell in 10 of 21 industries, representing 49.6 per cent of the manufacturing sector.

Sales in the petroleum and coal products industry fell 10.9 per cent to $5.2 billion on lower sales volumes as the sector was hit by partial shutdowns at a number of Canadian refineries for maintenance work during the month.

Dolega noted that the weakness was highly concentrated, both geographically and sectorally.

“Moreover, it appears to be largely related to temporary shutdowns related to refinery maintenance and a return to normal levels after a one-off shipment of armoured vehicles to the Middle East,” he wrote.

“Taken together, these facts offer hope that the May/June numbers will see a bounce-back as shipments rebound as activity is restarted.”

Sales were up in 11 industries with the largest increases in the primary metal manufacturing and food products industries.

Regionally, sales were down in six provinces, led by Quebec and Alberta.