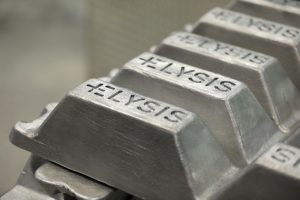 Executives of Rio Tinto, Alcoa and Apple were joined by Canadian Prime Minister Justin Trudeau and Premier of Québec Philippe Couillard for the announcement, which signals the most significant innovation in the aluminium industry in more than a century.

To advance larger scale development and commercialization of the new process, Alcoa and Rio Tinto are forming Elysis, a joint venture company to further develop the new process with a technology package planned for sale beginning in 2024.

Elysis, which will be headquartered in Montreal with a research facility in Quebec’s Saguenay–Lac-Saint-Jean region, will develop and license the technology so it can be used to retrofit existing smelters or build new facilities.

When fully developed and implemented, it will eliminate direct greenhouse gas emissions from the smelting process and strengthen the closely integrated Canada–United States aluminium and manufacturing industry. The new joint venture company will also sell proprietary anode and cathode materials, which will last more than 30 times longer than traditional components.

Canada and Quebec are each investing $60 million (CAD) in Elysis. The provincial government of Quebec will have a 3.5 per cent equity stake in the joint venture with the remaining ownership split evenly between Alcoa and Rio Tinto.

Apple is providing an investment of $13 million (CAD). The company helped facilitate the collaboration between Alcoa and Rio Tinto on the carbon-free smelting process, and Apple has agreed to provide technical support to the JV partners.

Rio Tinto and Alcoa will invest $55 million (CAD) cash over the next three years and contribute specific intellectual property and patents.

The patent-protected technology, developed by Alcoa, is currently producing metal at the Alcoa Technical Center, near Pittsburgh in the United States, where the process has been operating at different scales since 2009. The joint venture intends to invest up to $40 million (CAD) in the United States, which would include funding to support the supply chain for the proprietary anode and cathode materials.

Vincent Christ, an experienced leader with more than 30 years’ experience at Rio Tinto Aluminium, has been named Chief Executive Officer of Elysis. Most recently, he has served as head of technology, research and development and automation programmes. He holds an engineering degree in electronics and industrial information technology.