Figurehead recognized for outstanding contribution to the pump industry 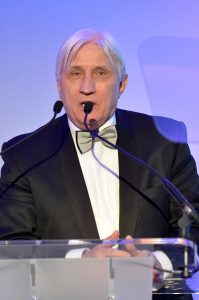 Fellow professionals in the British Pump Manufacturers’ Association (BPMA) selected Chris for the honour in the prestigious Pump Industry Awards, citing his “significant and consistent contribution the pump industry” over his 39 year career.

Announcing the award, the BPMA stated: “Chris is not only a great figurehead for the business, but he is also a great accountant and a great engineer and has been responsible for making AESSEAL what it is today.

“He believes in supporting the local community, furthering the engineering profession and is particularly interested in promoting women in engineering.

“Chris continues to invest heavily into the AESSEAL business and his outstanding contribution to the mechanical sealing, reliability and associated pump industries, is probably unsurpassed.”

Chris Rea established AESSEAL in 1979 with a staff of just five, designing and manufacturing mechanical seals and support systems for a wide range of industries.

His ongoing investment and innovation has seen the Rotherham-based company grow into a global design, production and customer service leader.

The investment in AESSEAL is evident in the £5.5 million spent on new state-of-the-art machinery, and building refurbishments totalling around £1 million, over the past year.

The AESSEAL systems division in Mangham Road, Rotherham, will be officially opened by President of the Institute of Mechanical Engineers (IMechE) Carolyn Griffiths on Friday April 20th following its £460,000 upgrade.

Carolyn Griffiths will join Chris Rea and other engineering industry leaders that evening for the annual IMechE dinner at the Cutlers’ Hall, Sheffield.

The 11 axis Nakamura Tome Super NTX features a unique parts handling system, designed and developed by AESSEAL. It provides super-fast production times and will improve operational efficiency as well as the quality of the core components of mechanical seal products manufactured at the site.

The Nakamura is the last of eight new machines which have been installed at AESSEAL sites in Rotherham and Bradford in the past year, creating more than 20 jobs and increasing production by 17%.
AESSEAL MD Chris Rea said: “To be given a Lifetime Achievement Award by my peers is a tremendous honour and one which came completely out of the blue.

“I’ve always considered the success of AESSEAL to be the result of a team effort involving everyone from our top engineers to our newest apprentices.

“Our new machinery can only add to our efficiency, reliability and award-winning customer service but the investment doesn’t stop there – we’re now working on future investment plans for the rest of 2018 and beyond.”

AESSEAL is one of the world’s leading specialists in the design and manufacture of mechanical seals, bearing protectors, seal support systems and gland packing. AESSEAL has 230 locations worldwide, supplying customers in 104 countries, and employs a global network of sales engineers and technical support specialists. It employs 1,675 people across the globe, including 370 in Yorkshire.