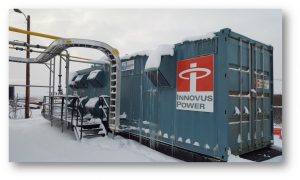 Innovus’ variable speed generator in Aklavik, NWT, is providing electricity to the community’s 300 households and is expected to save the community 80,000 litres of fuel per year. (CNW Group/Innovus-Power)

Peterborough, ON – Northwest Territories Power Corporation (NTPC) went live with Innovus Power’s Variable Speed Generator (VSG) Project in Aklavik Northwest Territories, on January 28, 2018. The remote northern community’s more than 300 households are now being powered with Innovus’ 590kW converter-based VSG platform which is expected to save the community an estimated 80,000 litres of fuel per year. Innovus’ technology seamlessly integrated the existing 52kW solar PV system, and will provide the ability to add significantly more renewables in Aklavik.

Innovus’ technology ushers in a new era in smart generation while addressing Canada’s northern energy Crisis. It allows the engine to operate at its most efficient speed for any load.  At low engine speeds, Innovus provides healthy low-load operation, while achieving up to 40% higher efficiency. Innovus’ platform also allows renewable penetration up to 90% without the added complexity and cost of storage normally required for grid stabilization. The result maximizes fuel savings and greenhouse gas (GHG) reductions.  In the future, as battery cost decrease, Innovus’ inverter based platform can readily integrate storage and accelerate its cost effective use for time-shifting.

At the core of Innovus’ platform is its proprietary embedded software control system, configured to incorporate a wide range of engines, fuels, and energy technologies. The system is built on proven and bankable major components. With major partnering OEM’s, the Innovus platform carries a global network of world class service and support.

“With the launch of NTPC’s Aklavik project, we are witnessing the beginning of a revolution in smart power generation,” states Marc Hoffman, Innovus’ CEO and President.  “Our technology brings proven efficiency, resiliency, and dispatchability and we look forward to playing an important role in achieving Climate Change goals in remote communities across Canada and the US.”

A 2017 study by the Waterloo Institute for Sustainable Energy (WISE) independently evaluated Innovus’ technology, and determined it provides the best solution to address the needs of Northern remote communities in Canada.  According to WISE, pairing Innovus with renewable energy sources reduces GHG emissions by 60% to 89% and fuel consumption by 53% to 83% while providing the lowest levelized cost of energy.