Cascades launches a transportation electrification program for its employees 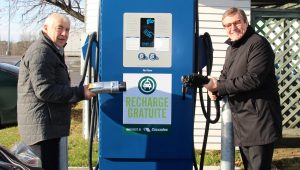 Alain Lemaire, co-founder and Executive Chairman of the Board of Directors of Cascades with Mario Plourde, President and Chief Executive Officer of Cascades. (CNW Group/Cascades Inc.)

Saint Hyacinthe, QC – Cascades launched a pilot transportation electrification project for its employees. To encourage them to reduce greenhouse gas emissions by acquiring an electric vehicle, the company has installed twenty-two 240‑V charging stations and one 480‑V fast charging station at its various plants in Kingsey Falls, Que. In addition, Cascades announced it would be offering a $2,000 financial incentive for employees who acquire an electric vehicle in the next year—a supplement to the government grants in effect.

Mario Plourde, president and CEO of Cascades, made the announcement at the Salon du véhicule électrique de Saint-Hyacinthe trade show alongside Isabelle Melançon, Minister of Sustainable Development, the Environment and the Fight Against Climate Change, and André Fortin, Minister of Transport, Sustainable Mobility and Transport Electrification, before numerous representatives of the sustainable transportation industry.

A unique program
“Since its beginnings, Cascades has been focused on innovation that reduces its environmental footprint and sets an example in sustainable development. Knowing that a change in transportation habits is required to make a substantial dent in GHG reductions, we believe that this unique pilot project is an important gesture for the future,” affirmed Mario Plourde, president and CEO of Cascades.

The $2,000 incentive for new electric vehicles will initially be limited to employees based in Kingsey Falls, Que., who number approximately 1,400. These employees will be able to charge their vehicles for free at the 23 new and the seven existing charging stations. With a total of 30 charging stations available for a resident base of approximately 2,000, Kingsey Falls is now Quebec’s most “plugged-in” city.

“Cascades’ employees care about environmental issues. In fact, an internal survey revealed that 63 per cent of our employees are considering purchasing an electric vehicle in the near future. As a responsible employer, we would like to help them turn intentions into action. We will assess the  results of the program in a year, with the goal of extending it to all of our units in North America where it’s possible to reduce the greenhouse gases,” added Plourde.

Given that 99 per cent of our electricity comes from renewable sources, Quebec is without question the best place in North America to drive an electric vehicle. “It will take a combination of factors to expand green vehicle sales, including wider variety and more affordable prices. In the meantime, Cascades must be congratulated for its commitment, which will catalyze the shift by spurring demand,” stated André Fortin, Minister of Transport, Sustainable Mobility and Transport Electrification.

“A key player in the green economy, Cascades continues to show its commitment to protecting the environment. I encourage Quebec’s businesses to follow suit and go green, in as many areas as possible. In addition to encouraging our shift to a low-carbon economy, promising projects like this one by Cascades let us work together to fight climate change, so we can ensure a good quality of life for our children. By combining our efforts, we will not only make a real difference in the Quebec of today, but we’ll help shape the Quebec of tomorrow too,” said Isabelle Melançon, Minister of Sustainable Development, the Environment and the Fight Against Climate Change.

Program to benefit the public as well
Cascades did not want to leave the public out and, therefore, decided to cap off its program with the acquisition of a fast charging station, open to all drivers, travellers, tourists and anyone that will pass through the region. This is the first fast charging station available at an employer’s site, and the first free charging station in Quebec. “Thanks to this major investment, Cascades is demonstrating strong leadership, and showing that it wants to contribute actively to the development of our electric transportation infrastructure. Through this initiative, it stands out as one of the most forward-thinking employers in Quebec,” confirmed Louis Tremblay, President and CEO of AddÉnergie, the charging station manufacturer contracted for this project the driving force behind FLO, Canada’s largest charging station network.