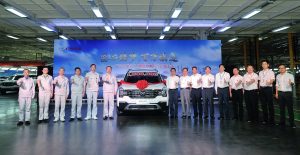 Guangzhou, China – China’s fastest growing automaker, GAC Motor, is celebrating the production of its one-millionth vehicle, a white 4WD GS8 that rolled off the assembly line on May 15 at its factory in Guangzhou, China.

By producing 1 million cars in only six years since the company was founded, GAC Motor has broken sales records unremittingly with every new model that is designed and engineered with the highest standards in quality.

“This is an important milestone for GAC Motor, as we rolled off the 600,000th vehicle last June and less than one year later, we’ve accomplished the goal of producing the one-millionth. Our boosting production capacity has proved the rapid development and advantages of the world-class vehicle manufacturing system by solid actions as we march into the ‘era of million,'” remarked Yu Jun, presisent of GAC Motor.

The company’s best-selling SUV, the GS4, also became the fastest model within its price range to break the 500,000 mark, and is setting a blistering sales pace of 35.5 per cent year-on-year growth, while the advanced GS8 now leads the high-end, seven-seat SUV category with sales exceeding 10,000 in March and April.

Adhering to a quality-centric strategy led by innovation from the very beginning, GAC Motor has applied advanced and intelligent technologies in all links of automotive manufacturing chain. The company’s high quality and competitive models designed to meet the individual needs of the consumers have withstood all tests and found opportunities in global markets.

After GAC’s establishment of its first North America R&D Center in Silicon Valley this year, GAC Motor has begun recruiting talents in all fields from research and development, and vehicle engineering to marketing communications and management.

A subsidiary of GAC Group, GAC Motor develops and manufactures premium quality vehicles, engines, components and auto accessories, achieving a year-to-year growth rate of 96 percent in 2016, the highest among all Chinese brands in the corresponding period.