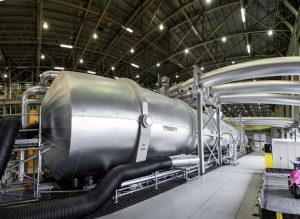 Clarington, ON – Canada’s largest clean energy project – the Darlington Nuclear Refurbishment – remains on schedule and on budget, as workers have now safely and successfully separated Unit 2 from the rest of the generating station. Ontario Power Generation (OPG) has completed the first of four substantial segments of the Unit 2 refurbishment and is moving into the next phase of work.

OPG is also marking three years since the company burned its last piece of coal to make power. It remains North America’s largest climate change action and today, more than 99 per cent of OPG’s power is free of smog and carbon emissions.

“On Saturday, April 15, we will celebrate three years without dirty coal as a source of energy in Ontario, which remains the single largest climate change initiative in North America,” said Energy Minister Glenn Thibeault. “As operator of both the Darlington and Pickering Nuclear Generating Stations, OPG has been an important partner in eliminating coal from our energy supply mix, while improving the reliability of our electricity system and keeping the air we breathe clean. This has not only improved our quality of life, but reduced the strain put on our healthcare system by air pollution. I’m extremely pleased the Darlington Refurbishment project is on time and on budget. With completion scheduled for 2026, we can continue to ensure clean air for Ontarians for decades to come.”

“Our transformation from coal to clean is a remarkable achievement, which would not have been possible without the dedicated employees of OPG,” said Jeff Lyash, OPG President and CEO. “They understand our purpose as a publicly owned company goes beyond generating power to helping ensure the health and well-being of our province.”

In addressing the Darlington Refurbishment, Lyash noted, “Projects that are well planned and managed often end the way they start. This important milestone caps off a strong start. We have a long way to go, but we’re confident we’ve done the work, and have the people in place to deliver this project safely and to plan.”

The next phase involves opening up the reactor, setting up specialized equipment, and starting the disassembly and removal of reactor components. “Here’s where the months of training and practice on our reactor mock-up will really pay off,” added Lyash. “My sincere thanks go out to our partner companies and the many workers for their ongoing commitment to quality and safety.”

OPG has also launched a new public awareness campaign titled, Inside Darlington, which uses the reactor face to tell the story of the refurbishment’s economic and environmental benefits. The campaign also aims to draw visitors to the company’s website to learn more about the project and its progress.