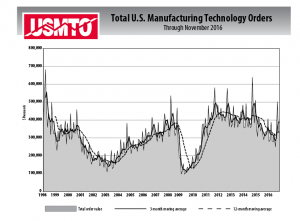 Source: The Association For Manufacturing Technology

The motor vehicle, aerospace and job shop sectors showed increased order activity in the last few months of the year, indicating capital investment in anticipation of a need for additional capacity. Some leading economic indicators suggest stronger activity ahead. The Purchasing Managers Index from ISM climbed for the fourth consecutive month to 54.7 in December, and new orders and production for U.S. factories rose to their highest levels since 2014. Industry analysts for manufacturing technology forecast that orders may begin to rebound as early as April.

“While our industry endured some challenges in 2016, bookings for the last few months of the year were better than expected and early input on January is very promising, particularly in the aerospace and job shop sectors,” said AMT President Douglas K. Woods. “We are seeing improvements in the overall economy, with post-election business confidence on the rise as demonstrated by strong performance in the financial and equity markets. We hope the new presidential administration and Congress keep that momentum going by focusing on comprehensive tax reform, global competitiveness and building a skilled workforce to ensure a strong future for U.S. manufacturing.”

November 2016 total order value was $329.61 million, down from October’s total of $337.58 million. Year to date, orders were valued at $3,577.71 million, compared to $3,771.28 million for the same point in 2015. USMTO is a reliable leading economic indicator as manufacturing companies invest in capital metalworking equipment to increase capacity and improve productivity.