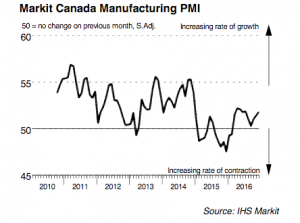 December data highlighted a positive end to 2016 for the Canadian manufacturing sector, led by the fastest upturn in incoming new work for two years.

The latest survey also pointed to the strongest pace of production growth since July and a sustained rise in payroll numbers. However, input cost inflation accelerated for the third month running, driven by higher prices for imported materials, especially metals. Pressure on operating margins resulted in the steepest rise in factory gate prices since May 2014.
At 51.8 in December, up from 51.5 in November, the seasonally adjusted Markit Canada Manufacturing Purchasing Managers’ Index (PMI) signalled a modest improvement in overall business conditions across the manufacturing sector. The latest reading was the strongest since July and well above the survey – record low seen at the same time in 2015 (47.5). Stronger business conditions largely reflected a sustained rebound in new order growth in December, alongside rising production volumes and continued job creation among manufacturing firms.
Output growth picked up to a five – month high in December, which survey respondents mainly linked to improving demand conditions. Reflecting this, new business levels rose at the steepest pace for two years, with manufacturers commenting on greater spending among clients in the energy and automotive sectors. Export sales increased only marginally, although the upward trend in December signalled a continued rebound from the declines seen during the third quarter of 2016.
Canadian manufacturers reported another increase in their staffing levels during December, which extended the current period of growth to three successive months. Additional staff recruitment was driven by rising production schedules, which in turn contributed to a further slight reduction in backlogs of work at the end of 2016.
Post-production inventories decreased in December, which continued the downward trend seen in each month since April. Some firms noted that stronger-than-expected sales growth had led to lower warehouse stocks of finished goods at the end
of 2016. Pre-production inventories were also depleted across the manufacturing sector, although the rate of decline was only marginal. Meanwhile, manufacturers reported longer delivery times from suppliers in December, which some attributed to rail freight delays.
Input cost inflation reached its strongest for almost two-and-a-half years in December, which manufacturers linked to exchange rate factors and rising commodity prices in general. Mirroring the upward trend for operating costs, latest data signalled the steepest rise in output charges since May 2014.
Tim Moore, Senior Economist at survey compilers IHS Markit, commented: “Canada’s manufacturing sector ended the year on a much stronger footing than it started, with production volumes and new orders both returning growth territory. Survey respondents attributed the latest improvement in manufacturing sales to greater demand from domestic clients, especially
those in the energy and automotive sectors.”
Moore also commented that December data pointed to widening provincial disparities in growth momentum. “A steeper rebound in manufacturing output across Alberta & BC contrasted with relatively subdued growth patterns elsewhere, most notably an export-led slowdown in Quebec.”