Manufacturing growth picks up to four-month high in November 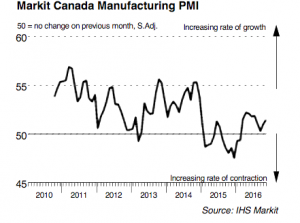 Canadian manufacturers reported a modest improvement in business conditions during November, driven by a rebound in production volumes and the fastest rise in new work since April, according to the latest Markit Canada Manufacturing PMI Report.

The latest survey also highlighted an upturn in staffing numbers and greater levels of input buying. At the same time, input cost inflation accelerated to its strongest since July 2014, which contributed to the fastest rise in manufacturers’ output charges in two-and-a-half years.

The seasonally adjusted Markit Canada Manufacturing Purchasing Managers’ Index (PMI) edged up to 51.5 in November, from 51.1 in October, to remain above the neutral 50.0 threshold for the ninth consecutive month. Moreover, the latest improvement in overall business conditions was the strongest recorded since July.

Increase in manufacturing production
November data indicated a return to rising output levels, following the stagnation recorded during the previous month. Although only marginal, the increase in manufacturing production was the fastest since August. Anecdotal evidence cited improving new order books, greater export sales and signs of a rebound in energy sector spending in particular. The latest survey highlighted that new business growth picked up to a seven-month high, supported by the first rise in export orders since June. Manufacturers noted that inventory building among clients and exchange rate depreciation against the U.S. dollar had provided an uplift to new work received from abroad.

Job creation on even keel
Despite manufacturers reporting a degree of concern about the outlook for client spending, the latest survey indicated that job creation was maintained in November. Moreover, the latest rise in payroll numbers was the strongest since July. Input buying also picked up during the latest survey period, which was linked to greater sales and the need to replenish inventories.

Supplier performance, lead times, factory gate charges
Supplier performance continued to deteriorate in November, although to the least marked degree since February. Longer lead-times were generally linked to transportation delays during the latest survey period. Meanwhile, manufacturers reported a solid increase in their factory gate charges during November, which ended a two-month period of price discounting. The rate of inflation was the fastest recorded since May 2014, which was widely linked to higher cost burdens. Reflecting this, the latest survey indicated that input price inflation accelerated to its fastest for over two years in November, driven by higher imported raw material costs.