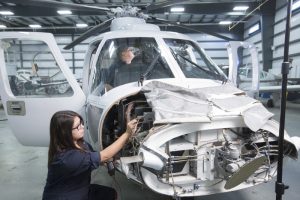 The S-76A helicopter maintenance trainer was transferred to Saskatchewan Indian Institute of Technologies in Saskatoon. The helicopter was converted to a maintenance trainer after being withdrawn from active flight status in 2015 having performed 26,291 hours in flight, and 16,723 landings since 1980. (PRNewsFoto/Sikorsky, a Lockheed Martin Company)

“The addition of the Sikorsky S-76 helicopter to our aircraft training fleet allows us to provide a greater hands-on experience to our students in a wide array of systems typical of modern helicopters,” said Riel Bellegarde, SIIT President and CEO. “Our students will ultimately benefit in the workforce by gaining early first-hand knowledge of the inspection, maintenance, and repair of a fully rigged helicopter, including its electronic, mechanical, and hydraulic systems.”

The maintenance trainer consists of a Sikorsky S-76A twin-engine helicopter recently retired from flight status, along with supporting hardware to keep the trainer functioning. This includes equipment to move and provide power to the trainer, and tablet-based electronic technical manuals that help students troubleshoot maintenance issues with interactive graphics. To ensure familiarization with the trainer package, Sikorsky also has provided training courses for SIIT instructors.

During the ceremony, William Falk, Sikorsky’s director for the Maritime Helicopter Project, who leads the program team from Sikorsky’s headquarters in Stratford, Connecticut, urged students to embrace a life-long career in the exciting field of aviation engineering.

“I encourage students at the SIIT to think expansively about the knowledge they are acquiring when they learn to inspect and maintain a modern helicopter,” said Falk. “This knowledge can then be taken to new heights – whether in Canada or internationally. This particular S-76A helicopter was previously maintained and operated with great care to carry thousands of passengers safely and reliably for almost 35 years. In its second life as a maintenance trainer, this same vessel can open up a world of opportunities for thousands of students.”

Charlie Bouchard, Lockheed Martin Canada chief executive and a former helicopter pilot in the Royal Canadian Air Force, who could not attend the ceremony, highlighted the importance of the maintenance skill-set for the aviation industry.

“I am passionate about today’s announcement because, as a former helicopter pilot who spent thousands of hours in the air, I have first-hand respect for the importance of well-trained maintenance workers in ensuring high quality performance and safety. This partnership also recognizes the critical role that hands-on training tools and courses play in producing Canada’s next generation of highly skilled maintenance workers for a rapidly growing industry,” said Bouchard.

The S-76A helicopter was withdrawn from active flight status in 2015 after performing 26,291 hours in flight, and 16,723 landings since 1980. During its operational life, transport companies used the aircraft to ferry up to 12 workers at a time to offshore oil and gas rigs, among other utility roles.

Sikorsky converted the aircraft to a non-flying maintenance trainer in the United States. In August 2016, the trainer and support items arrived by truck at the Saskatchewan Aviation Learning Centre.

The S-76A helicopter is the earliest model in the S-76 helicopter family, which has seen continuous production since 1979. To date, Sikorsky has delivered more than 850 S-76 helicopters, contributing daily to nearly 7 million total fleet hours in more than 40 countries on five continents. The newest variant — the S-76D helicopter — was introduced in 2013 with a substantial increase in engine performance and power.

The Saskatchewan Aviation Learning Centre is a joint effort of SIIT, the Government of Canada, the Province of Saskatchewan, and the Saskatoon Airport Authority.