Calgary – Suncor released its 2017 corporate guidance today which includes a capital spending program of between $4.8 billion and $5.2 billion and average production of 680,000 to 720,000 barrels of oil equivalent per day (boe/d). The midpoints of these ranges represent a year over year increase to production of more than 13 per cent and a reduction to capital spending of approximately $1 billion even with a full year of increased Syncrude ownership.

The guidance includes a projected Suncor Oil Sands operations cash operating costs per barrel range of $24.00 – $27.00 impacted by approximately $1.00 per barrel year over year as a result of assumed rising natural gas prices. The midpoint of the range represents a 37 per cent reduction since 2011. Syncrude cash operating costs per barrel are expected to be $32.00 – $35.00, also reflecting continued improvement over previous years.

“We continue to focus on delivering on our commitments and making decisions that demonstrate capital discipline, while reflecting our long-term vision for the company,” said Steve Williams, president and chief executive officer. “Through our 2017 capital spending program, we’ve earmarked the capital required to bring two major growth projects, Fort Hills and Hebron, to completion while at the same time investing in our existing assets to ensure continued safe, reliable and efficient operations. We will maintain the unwavering focus on cost management, which has helped us to generate strong cash flow throughout these past two years of low oil prices.”

Approximately 40 per cent of the 2017 capital spending program is allocated towards upstream growth projects, including Fort Hills and Hebron, which are both expected to achieve first oil by the end of 2017. The remaining 60 per cent is directed to sustaining capital in the upstream, downstream and corporate segments.

Suncor’s corporate guidance provides management’s outlook for 2017 in certain key areas of the company’s business. Users of this forward-looking information are cautioned that actual results may vary materially from the targets disclosed. Readers are cautioned against placing undue reliance on this guidance. 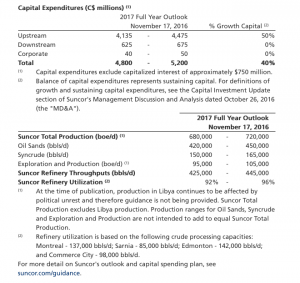