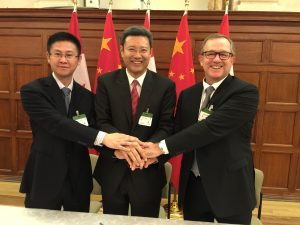 Montreal – SNC-Lavalin announced that it signed an agreement in principle for a new Joint Venture with China National Nuclear Corporation (CNNC) and Shanghai Electric Group Company Ltd. The new company would develop, market and build the Advanced Fuel CANDU Reactor (AFCR). The creation of the joint venture in principle follows the signing of a framework agreement in 2014, and is subject to all government and regulatory approvals.

The new company is expected to be registered in mid-2017, and would be followed by the formation of two design centres — one in Canada and another in China — to complete the AFCR technology. This could lead to construction of the world’s first two AFCR™ in China, and possibly subsequent builds in China and around the world.

“This is a game changer in the nuclear industry, and a great endorsement of our expertise and CANDU nuclear technology from the largest nuclear market in the world,” said Sandy Taylor, President, Power, SNC-Lavalin. “Each new build in China, and anywhere in the world, will benefit Canada in terms of job creation, innovation and nuclear research & development, environmental stewardship, and will contribute to reduce global carbon emissions.” Canada’s nuclear sector directly contributes to over $6 billion to the economy annually, employs more than 30,000 highly trained and specialized people, and creates an additional 30,000 jobs indirectly through contracting1.

The market potential for AFCR technology in China is considerable. Each AFCR can use recycled-fuel from four light-water reactors (LWRs) to generate six million megawatt-hours (MWh) of additional carbon-free electricity without needing any new natural uranium fuel. This would be enough new electricity to power four million Chinese homes, and also displace six million tonnes of carbon emissions per year vs. coal, the equivalent of removing one million cars from the road. China has more than 33 LWR nuclear power reactors in operation and another 23 LWRs under construction.

About SNC-Lavalin
SNC-Lavalin is one of the leading engineering and construction groups in the world and a major player in the ownership of infrastructure. For more information, visit www.snclavalin.com.