Eyes Underground: the cutting edge technology at the heart of mine safety 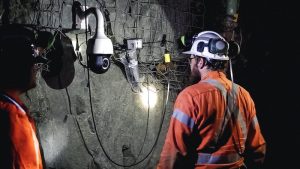 Sudbury, ON – When your business relies on sending staff deep underground, safety training doesn’t stop at preventing accidents. The mining industry’s leaders know this well. It’s why mining companies big and small invest in the latest technology and training to create the most effective rescue teams possible in the event of a crisis underground.

In line with that safety-first approach, the industry has embraced competition as a reliable way to drive up standards. From August 19 to 26 2016, mine rescue teams and mine executives from around the world met in Sudbury, Ontario in Canada for the 10th annual International Mine Rescue Competition (IMRC). The elite of the industry’s health and safety experts gathered to test themselves against the best in the industry, and to learn from each other’s advances in technology and practice.

“At the remote mine site locations, Full 1080p High Definition Environmental CCTV cameras with infrared illumination were used, coupled with FLIR Thermal Cameras. This allows full visibility of participants regardless of the situation they are faced with such as areas filled with smoke or fog, or zero visibility.

“During the competition, all of these cameras were communicating to the surface over the mine-wide encrypted Wi-Fi network. With this system, the images are then transmitted to the multiple viewing stations over Vale’s WAN and are received and viewed on our Control Center Software Application.”

This technology enables mine operators to monitor a series of networked underground mine sites in real time. For IMRC 2016, participants viewed live streaming video throughout the competition.