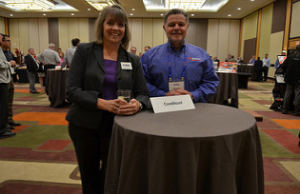 Chicago, Ill. — Even the June 7 construction accident which caused a sink hole and the evacuation of downtown Ottawa couldn’t stop Canadian power transmission/motion control (PT/MC) distributors and manufacturers from gathering June 8-9, 2016, at the Westin Ottawa for PTDA’s 15th Canadian Conference. Networking and face-to-face meetings between channel partners and peers proved to be the primary focus for participants, along with gathering educational and other industry-specific information to put to use right away upon returning home to conduct business.

To facilitate networking opportunities, the Canadian Conference included the Industry Showcase Welcome Reception (with tabletop displays by all PTDA manufacturer members in attendance), informal networking, a golf outing and a schedule that included frequent meals and breaks for members to network. The closing event at the Canadian War Museum offered even more networking opportunities at a thought-provoking venue.

David Chamberlain of Source Atlantic Power Transmission said of the Canadian Conference, “I can appreciate the information that was presented, specifically the need for innovation, improved recruitment techniques and the difficulties to bring innovation and ideas to customers and this information helps.”

Canadian Conference Planning Committee Co-chair, secretary & treasurer, Mitch Bouchard, General Bearing Service Inc., whose hometown is Ottawa said, “Despite the initial challenge of helping our members arrive and check in during the sinkhole issue, everything went very smoothly. I think the turnout was healthy, and the distributors I spoke with seemed very happy about the overall conference.”

His co-chair Paul Meo, president, NTN Bearing Corp. of Canada Ltd., who included eight additional NTN employees as participants, added, “I was very happy with the turnout by distributors. The educational sessions were impactful, and every single networking event ended up with people still enjoying themselves even as the time wrapped up. Overall, Ottawa was fantastic.”

A conference recap and a link to photographs from the event are available at ptda.org/CanadianConference and Twitter posts can be found with #PTDA16CC.