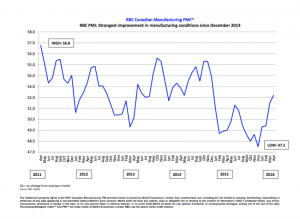 April data highlighted a sustained recovery in business conditions across the Canadian manufacturing sector, with growth of output, new orders and employment all  accelerating  since the previous month.  At the same time, manufacturers pointed to the weakest rate of input price inflation so far in 2016, despite rising demand for raw materials and some reports of renewed stock shortages among suppliers. Reduced cost pressures and efforts to  stimulate client demand in turn contributed to a decline in factory gate charges for the first time in three months.

Adjusted for seasonal influences, the RBC Canadian Manufacturing PMI registered 52.2 in April, up slightly from 51.5 in March and above the neutral 50.0 threshold for the second month running. Although indicative of a moderate improvement in business conditions, the latest reading was the strongest since December 2014. This was mainly driven by a rebound in output, new business and employment growth. Meanwhile, the only negative influence on the headline PMI was a fractional reduction in stocks of purchases during April, which reflected ongoing caution among manufacturers in relation to their inventory management.

Canadian  manufacturers experienced a moderate expansion of production volumes  during April, with the latest upturn the fastest since June 2015. Survey respondents cited greater new order levels and, in some cases, renewed efforts to boost operating  capacity at their plants. After a return to growth in March, the latest survey pointed to the fastest improvement in incoming new work for almost a year-and-a-half in April. This partly reflected another increase in  new  export  sales, which manufacturers linked to exchange  rate factors and rising demand from U.S. clients. That said, the latest rise in overall new work from abroad was only modest and the softest since November 2015.

Job  creation gathered pace across the manufacturing sector in April, as highlighted by the strongest upturn in payroll numbers since December 2014. Input buying also expanded at the fastest pace for almost a year-and-a-half, which contributed to pressures on supply chains and another deterioration in vendor performance. However, manufacturers remained cautious about their inventory holdings in April, with firms reporting slight reductions in both their stocks of inputs and finished goods.

Meanwhile, average cost burdens continued to rise at manufacturing firms in April, but the rate of inflation eased markedly since March and was the weakest so far in 2016. While most survey respondents cited elevated imported raw material costs, some firms commented on successful price negotiations following the recent strengthening of the loonie. In contrast to the trend for input costs, latest data highlighted a slight reduction in factory gate charges across the manufacturing sector, which was attributed to squeezed pricing power and efforts to stimulate client demand.