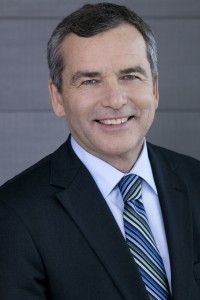 Ottawa – On behalf of the Board of Directors of Genome Canada, Chair of the Board, Lorne Hepworth, announced the appointment of Marc LePage as the organization’s new President and CEO, starting January 4, 2016.

“Mr. LePage has deep roots within the Canadian genomics community and a track record of success in advancing this cutting-edge field of science, technology and innovation. His regional, national and international experience, coupled with exceptional fundraising and communication skills, make him extremely well qualified to lead Genome Canada in harnessing the transformative power of genomics for the benefit of all Canadians,” Hepworth said. He added that LePage’s appointment follows an exhaustive national and international executive search led by a special sub-committee of the Board.

LePage has served as President and CEO of Génome Québec since 2011 where he has led a major increase in research activity and enhanced focus on the development of genomic applications within priority sectors of the province. Prior to this role, he was Special Advisor (Climate Change & Energy) at the Canadian Embassy in Washington, D.C. and Consul General in the Canadian Consulate in San Francisco/Silicon Valley. LePage was one of the pioneers behind the founding of Genome Canada in 2000. During his tenure as Executive Vice-President of Corporate Development, he made key contributions to the rapid ramp up the organization, its programs and peer review system.

“Canada has a thriving genomics research enterprise and I am honoured to take on the leadership role of an organization that I know and admire,” said LePage. “I look forward to working in close partnership with Canada’s six regional Genome Centres, scientists across Canada, and many partners from the public, private and not-for-profit sectors to realize the great potential of genomics for Canada,” he added.

Genome Canada wishes to thank Dr. Cindy Bell for serving as Interim President and CEO since the departure of former President and CEO, Dr. Pierre Meulien, who stepped down in July to assume a position as head of Europe’s Innovative Medicines Initiative. Dr. Bell will continue in her role of Executive Vice-President, Corporate Development, at Genome Canada.

About Genome Canada
Genome Canada is a not-for-profit organization that aims to harness the transformative power of genomics for the benefit of all Canadians. We connect ideas and people across public and private sectors to find new uses for genomics, invest in large-scale science and technology to fuel innovation, and translate discoveries into solutions across key sectors of national importance, including health, agriculture, forestry, fisheries & aquaculture, energy, mining, and the environment. For more information, visit www.genomecanada.ca.