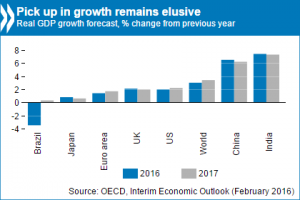 Ottawa – The OECD has cut its projections for Canadian, U.S. and global economic growth over the next two years and urged governments to respond to help strengthen demand.

“Experience to date suggests that reliance on monetary policy alone has been insufficient to deliver satisfactory growth, so that greater use of fiscal and structural levers is required.”

For Canada, the OECD predicted the economy will grow by 1.4 per cent in 2016, slightly more than the 1.2 per cent estimated for 2015 but less than its previous projection of 2.0 per cent growth for this year.

Canada’s economic growth is expected to pick up to 2.2 per cent in 2017, down from the 2.3 per cent that had been forecast earlier.

“The world economy is likely to expand no faster in 2016 than in 2015, its slowest pace in five years,” the OECD said.

“Trade and investment are weak. Sluggish demand is leading to low inflation and inadequate wage and employment growth.”

Growth is slowing in many emerging economies, with a very modest recovery in advanced economies and low prices depressing commodity exporters, the OECD report said.

The falling price of oil and other commodities have taken their toll on the Canadian economy in recent months.

In response, Ottawa has said it will run a deficit in its upcoming budget in a bid to help give the economy a boost, in part by spending on infrastructure projects.

The revised outlook by the OECD for the Canadian economy in 2016 brings it in line with the latest forecast by the Bank of Canada for growth of 1.4 per cent this year. But the Canadian central bank is predicting slightly higher growth of 2.4 per cent in 2017.

The OECD report pointed to recent weak data from major economies, including the United States and Canada, as well as financial instability that’s reflected in the fall of equity and bond prices worldwide.

The OECD downgrade came as Statistics Canada reported Thursday that wholesale sales rose 2.0 per cent to $57.2 billion in December, led by record results by the motor vehicle and parts subsector, which climbed 10.6 per cent to $11.3 billion.

The result topped the expectations of economists who had expected a gain of 0.2 per cent, according to Thomson Reuters.