Manufacturing downturn moderates at start of 2016 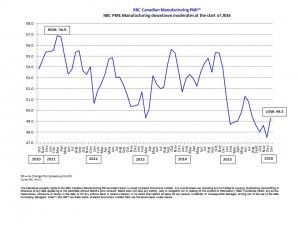 The main bright spot was a solid rebound in export sales, which helped offset some of the downturn in domestic demand. A number of manufacturers noted that the weaker loonie had contributed to rising new business wins from U.S. clients. At the same time, exchange rate depreciation also led to a strong and accelerated increase in average cost burdens, with input price inflation hitting an 18-month high in January.

A monthly survey, conducted in association with Markit, a leading global financial information services company, and the Supply Chain Management Association (SCMA), the RBC PMI offers a comprehensive and early indicator of trends in the Canadian manufacturing sector.

At 49.3 in January, the seasonally adjusted RBC Canadian Manufacturing PMI recovered from December’s survey-record low of 47.5, but remained below the neutral 50.0 threshold for the sixth consecutive month. The current period of decline is the longest since the survey began in late-2010, although the latest reading was the highest since last August.

“While Canadian business conditions continued to deteriorate in January, we saw signs of stabilization in the manufacturing industry supported by strong export sales alongside a pick up in the US economy and a weakening Canadian dollar,” said Craig Wright, senior vice-president and chief economist, RBC. “Ontario manufacturing continues to be the bright spot, while the sharp drop in performance in Alberta and B.C. suggests that heightened economic uncertainty and ongoing declines in capital spending are weighing on the economy.”

January data signalled a slower reduction in output volumes than that recorded in December. Moreover, the rate of decline was only marginal and the least marked for five months. Anecdotal evidence suggested that improving export demand had supported production levels in January. At the same time, heightened economic uncertainty and ongoing declines in capital spending by energy sector clients was cited as a brake on manufacturing output.

Mirroring the trend for production, the latest data pointed to a considerably slower fall in new business volumes than seen at the end of 2015. Moreover, the rate of decline in overall new orders was marginal and the slowest since the current downturn began last September. There were widespread reports that greater demand from abroad had helped to stabilize new business levels in January. Reflecting this, latest data pointed to the strongest rise in new export orders since November 2014.

Job shedding moderated across the manufacturing sector at the start of 2016, following the survey-record fall seen during December. In contrast, the rate of decline in staffing numbers was the slowest for six months during January. A number of firms noted that the uncertain business outlook had led to the non-replacement of voluntary leavers. Moreover, backlogs of work dropped for the fourteenth month running, suggesting a sustained lack of pressure on operating capacity.

January data suggested only a slight squeeze on suppliers’ delivery times, while input buying fell over the month. Moreover, manufacturers continued to lower their inventories at the start of 2016. However, upward pressure on costs persisted, with overall input prices rising at the fastest pace since July 2014. This in turn contributed to the sharpest increase in factory gate charges for over a year-and-a-half.

“After December’s record low Canada’s manufacturing sector was close to stabilizing in January, with improving exports a key ingredient at the start of 2016,” said Cheryl Paradowski, president and chief executive officer, SCMA. “Manufacturers saw a solid upturn in new work from abroad, which helped support production levels but didn’t quite offset sustained weak domestic sales. The figure for Canada as a whole continued to mask diverging fortunes provincially, notably between the export-led manufacturing rebound in Ontario and the oil-related downturn faced by a large proportion of manufacturers in Alberta & British Columbia.”