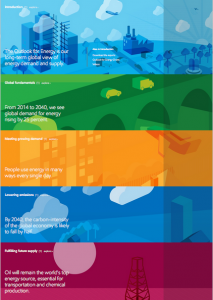 Irving, Texas – Global energy demand will increase 25 per cent between 2014 and 2040, driven by population growth and economic expansion, ExxonMobil said in the 2016 edition of The Outlook for Energy. At the same time, energy efficiency gains and increased use of renewable energy sources and lower carbon fuels, such as natural gas, are expected to help reduce by half the carbon intensity of the global economy.

During the period, the world’s population will increase by about 2 billion people and emerging economies will continue to expand significantly. Most growth in energy demand will occur in developing nations that are not part of the Organization for Economic Co-operation and Development (OECD). Per capita income in those countries is likely to increase by 135 per cent.
Natural gas is expected to meet about 40 per cent of the growth in global energy needs and demand for the fuel will increase by 50 per cent. Nuclear and renewable energy sources – including bio-energy, hydro, geothermal, wind, and solar – are also likely to account for nearly 40 per cent of the growth in global energy demand by 2040. By then, they are expected to make up nearly 25 per cent of supplies of which nuclear alone represents about one third.

“ExxonMobil’s analysis and those of independent agencies confirms our long-standing view that all viable energy sources will be needed to meet increasing demand,” said Rex W. Tillerson, chairman and chief executive officer of Exxon Mobil Corporation. “The Outlook for Energy is a useful resource to help understand future energy supply and demand, which can aid decisions by individuals, businesses and governments that together will affect the future of energy.”

The outlook projects that global energy-related carbon dioxide emissions will peak around 2030 and then start to decline. Emissions in OECD nations are projected to fall by about 20 per cent from 2014 to 2040.

The Outlook for Energy is ExxonMobil’s long-range forecast developed by its economists, engineers and scientists through data-driven analysis. It examines energy supply and demand trends for approximately 100 countries, 15 demand sectors and 20 different energy types.

“Our forecast is used as a foundation for the company’s business strategies and to help guide multi-billion dollar investment decisions,” said William Colton, vice president of ExxonMobil Corporate Strategic Planning, which develops The Outlook for Energy. “For many years the outlook has taken into account policies established to reduce energy-related carbon dioxide emissions. The climate accord reached at the recent COP 21 conference in Paris set many new goals, and while many related policies are still emerging, the outlook continues to anticipate that such policies will increase the cost of carbon dioxide emissions over time.”

Key findings of the report include:
•    In 2040, oil and natural gas are expected to make up nearly 60 percent of global supplies, while nuclear and renewables will be approaching 25 percent. Oil will provide one third of the world’s energy in 2040, remaining the No. 1 source of fuel, and natural gas will move into second place.
•    North America, which for decades had been an oil importer, is on pace to become a net exporter around 2020.
•    India will surpass China as the world’s most populous nation, with 1.6 billion people. The two countries are expected to account for almost half of the growth in global energy demand.
•    Global demand for electricity is expected to increase by 65 percent, and 85 percent of the increase is in non-OECD nations.
•    The share of the world’s electricity generated by coal is expected to fall to about 30 percent in 2040 from approximately 40 percent in 2014.
•    Global energy demand from transportation is projected to rise by about 30 percent, and practically all the growth will be in non-OECD countries.
•    Sales of new hybrids are expected to jump from about 2 percent of new-car sales in 2014 to more than 40 percent by 2040, when one in four cars in the world will be a hybrid. Average fuel economy will rise from 25 to about 45 miles per gallon.
•    Already the world’s largest oil-importing region, Asia Pacific’s net imports are projected to rise by more than 50 percent by 2040 as domestic production remains steady and demand increases.

For more information about The Outlook for Energy, visit www.exxonmobil.com/energyoutlook.