Manufacturing PMI drops to a new survey-record low in December 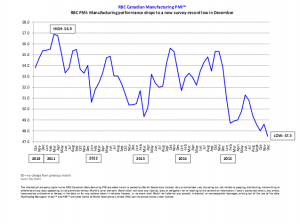 Toronto – December data indicated that the manufacturing sector experienced another reduction in output volumes and new business intakes at the end of 2015, with the latest deterioration in overall conditions the sharpest since the survey began in October 2010, according to the RBC Canadian Manufacturing Purchasing Managers’ Index (RBC PMI). There were widespread reports that subdued business confidence had resulted in lower spending levels and delays to new projects, especially from clients operating in the energy sector. Manufacturers responded to the latest fall in new work by lowering their inventories and initiating price discounting strategies. Moreover, payroll numbers decreased for the sixth month running amid a sharp and accelerated fall in work-in-hand across the manufacturing sector.

Adjusted for seasonal influences, the RBC Canadian Manufacturing PMI registered 47.5 in December, down from 48.6 in November and below the neutral 50.0 threshold for the fifth consecutive month. The latest PMI reading was the lowest in just over five years of data collection, largely reflecting weaker contributions from the output, new orders and employment components.

Canadian manufacturers signalled a decline in production levels for the fifth month running in December, which was overwhelmingly linked to weaker domestic demand patterns. Although new export work picked up slightly, and at the fastest pace since June, overall volumes of new work decreased at a survey-record pace. Companies that reported a rise in export sales generally linked this to support from the weaker exchange rate, alongside successful efforts to enter new overseas markets. At the same time, survey respondents noted that falling domestic demand, especially for investment goods, had driven the overall decline in workloads at the end of 2015.

Staffing levels were reduced again in December, with the pace of job cuts accelerating to the fastest recorded since the survey began in October 2010. Anecdotal evidence suggested that lower payroll numbers reflected a lack of new work to replace completed projects and, in some cases, panel members also cited intense pressure on operating margins.

Lower workloads resulted in sustained efforts to reduce inventory holdings during December. Pre-production stocks and finished goods inventories both fell during the latest survey period, albeit at a slower pace than in November. Input buying decreased for the sixth month running, which contributed to the least marked deterioration in supplier performance for two-and-a-half years.

Meanwhile, average prices charged by Canadian manufacturers decreased at a moderate pace in December, which marked the first reduction since August 2013. Anecdotal evidence suggested that strong competition for new work had resulted in renewed price discounting at the end of 2015. At the same time, overall input price inflation eased sharply to its weakest since January, despite continued upward pressure on costs from the weaker exchange rate.