Skills/Compétences Canada (SCC), together with the Minister of Employment and Social Development Canada and Minister for Democratic Reform, the Honourable Pierre Poilievre, and HGTV star, Mike Holmes Jr., have announced the official members of WorldSkills Team Canada 2015. The 29-member team represents the country's best youth in skilled trades and technologies. They will compete in Brazil this August at the 43rd WorldSkills Competition, in São Paulo. This Competition represents the pinnacle of excellence in skilled trades and technologies.

The competitors named to WorldSkills Team Canada 2015 – all under 23 years of age and coming from different regions from across the country – rose to the top of the Skills Canada National Competition and completed the final step of qualification for the international team through the WorldSkills Canadian Trials, meeting pre-established Canadian standards in their respective fields. In Brazil, they will go up against more than 1,000 competitors from 72 WorldSkills Member countries/regions, further testing their skills against international competency standards.

Minister Poilievre congratulated the competitors and wished them well in Brazil on behalf of the Government of Canada.

“We need young people like you, who excel in your field, to bring your talent to the workforce. I really hope that other young Canadians will look to all of you and think, “I can do that too!” You are an inspiration to your peers, and to the rest of us as well. This is why our Government is helping young people pursue careers in the skilled trades through additional tax credits, grants, training programs and the new Canada Apprentice Loan,” he said.

“The Team Canada competitors are the best of their generation in this country in skilled trades and technologies,” says Shaun Thorson, CEO of SCC. “They also represent Canada’s future potential. Professional education and training are the most important tools we can leverage in maintaining a strong and vibrant Canadian economy.”

WorldSkills Team Canada 2015 will compete from August 11 to 16 in Anhembi Park in São Paulo, Brazil, in front of a crowd of over 200,000 spectators, which includes students, teachers and industry experts. Team Canada will not only compete, they will spark dialogue on further improving quality and access to vocational training and generate new ideas to inspire youth to consider technical careers.

“I know they will make us proud in Brazil,” says Holmes. “They already have here at home.”

Canadians can get more information on Team Canada by following the Twitter conversation at #WSTC2015 and by following SCC’s Facebook page. Biographies of all 29 WorldSkills Team Canada 2015 competitors will be available shortly at www.skillscompetencescanada.com. An official group photo of the team will be posted on March 6 on Flickr. 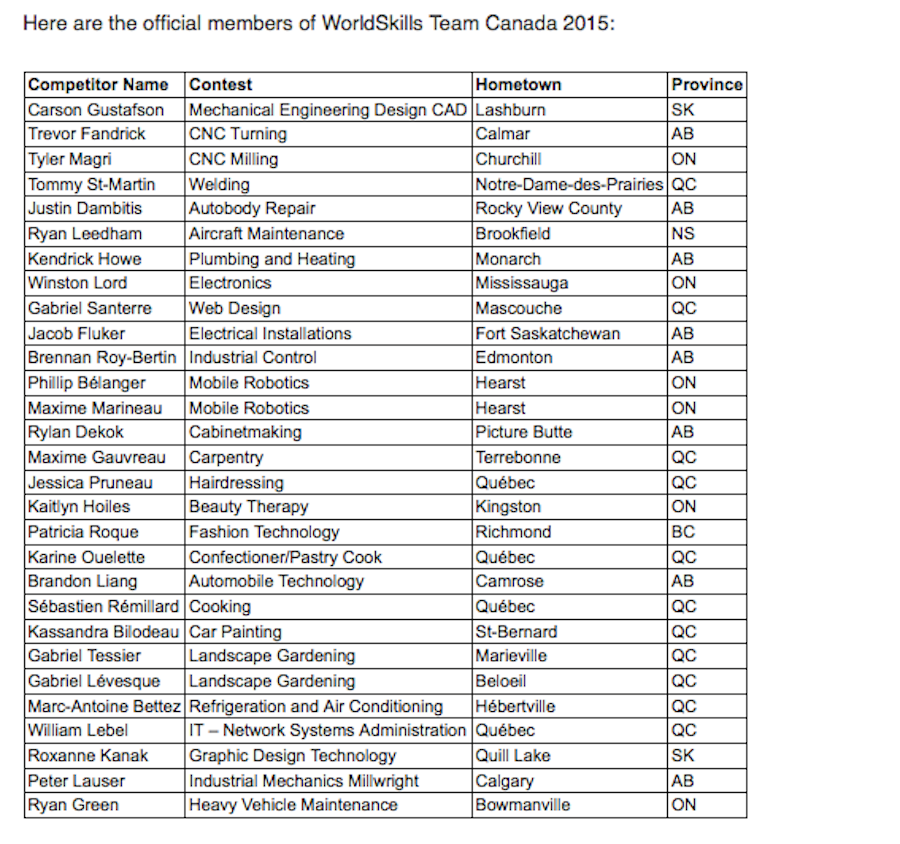