A newsprint mill contacted me the other day. They had a single-stage gearbox that had been noisy from the first day of operation after it had come back from refurbishment at a local shop. Due to the unusual noise, they were taking weekly vibration analysis measures looking for something wrong with the gearbox.

Finally, based on vibration readings that pointed towards an outer race damage on the input shaft support bearings, the gearbox was removed from service and sent to me for an in-depth analysis.

When the gear wheel was put on our measuring device I indeed saw the “wobble.” As well, the pinion showed a tooth profile that did not have a relief that is typically used to ensure quiet running.

When consulting with a colleague whose expertise is in vibration analysis, a review of the vibration data was provided (a spectrum was not provided, only the fault frequency and its amplitude) and we decided that despite the fault frequency matching the bearing outer race frequency, the magnitude of the signal would not be one that we would remove a piece of machinery for. In addition, the reported fault frequency did not relate to any gear frequency.

When the bearings were inspected, we found that the bearing on the drive end of the input shaft had been damaged by current leakage. This would suggest a grounding issue with the motor and the gearbox was not electrically insulated from the motor.

Well, at least we discovered the cause of the bearing fault frequency. However, this damage would not have been present on the first day of operation, so it cannot account for the complaint of the noisy gearbox.

From this I see a problem:
The first is that there is a dependence or belief that vibration analysis will be able to detect any issue all the time. I do not know exactly what transpired, however one scenario could have been that the vibration technician was told to “find something wrong” and as soon as there was a signal that could be called a fault, the gearbox was removed from service.

Had this gearbox been sent back to the rebuilder, that rebuilder would have found the damaged bearing, shown the user the damaged bearing and, voila, problem solved. The issue is that this problem (a grounding issue) would have been caused by a fault in the motor, the installation of the motor or the use of a non-insulating coupling when one should have been used. It would not have been a problem with the gearbox remanufacture and the user would have had no recourse in terms of the gear issue, which was in fact the problem from day one.

What should have happened?

Other Issues
The gearbox is driven by a variable speed drive. These are notorious for generating current leakage damage to bearings due to their nature. Proper insulating techniques must be used to contain the induced current such that connected machine components are not damaged. 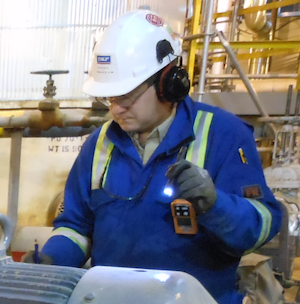 Douglas Martin is a heavy industry engineer based in Vancouver. He specializes in the design of rotating equipment, failure analysis and lubrication. Reach him by email at doug64martin@gmail.com.