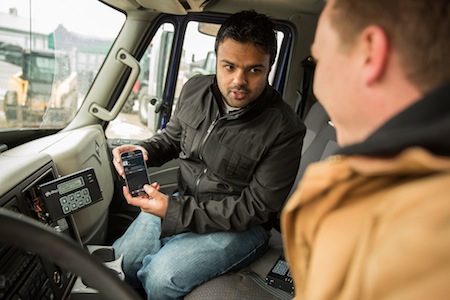 December 16, 2013 – The days of scraping down windshields may soon be a thing of the past, if it’s up to two University of Waterloo graduates.

“Frost is a major problem for individuals and businesses daily. Not only is it inconvenient but it has an impact on safety and can even hinder economic activity,” said Abhinay Kondamreddy, a nanotechnology engineering graduate who developed Neverfrost along with three classmates.

Neverfrost is an environmentally-friendly technology that prevents frost, fog, and ice formation. The innovation is the foundation for a new startup, also called Neverfrost.

By spraying Neverfrost on a windshield at night, drivers can avoid scraping and defrosting it on cold winter mornings, and clear the windshield simply by running the wipers. The Neverfrost technology prevents snow from freezing to the glass as well as fog and frost. Neverfrost expects to begin taking pre-orders for the spray with a Kickstarter campaign in March. Future plans for Neverfrost include incorporating it directly into washer fluids.

Kondamreddy is one of two entrepreneurs who continue to further their technologies and startups thanks to a $60,000 Scientists and Engineers in Business fellowship. The fellowship is a University of Waterloo program supported by the Federal Economic Development Agency for Southern Ontario for promising entrepreneurs who want to commercialize their innovations and start high-tech businesses.

For contractors who drop salt on parking lots and sidewalks, as well as the municipalities or owners who pay for it, there’s never been a way to measure how much salt is actually dispensed. Smart Scale, an automated salt logging and tracking system designed specifically for the winter maintenance industry is changing that.

Developed by Raqib Omer, a Waterloo Engineering graduate, Smart Scale uses exclusive hardware wirelessly paired with GPS-enabled smart phones to track the location of a maintenance vehicle and amount of salt dispensed, and logs the information on a cloud-based system in real time. Since the cost of salt is based on size of load, property owners can be assured they’re getting what they paid for, as well as reducing risks that exist in the industry.

“With growing public concern on the environmental effects of salt, rising salt prices, and increasing fear of litigation due to slips and falls, as well as driving conditions, reliable and accurate information on salt application is becoming a necessity for maintenance contractors,” said Omer.

More than 20 winter maintenance contractors in Canada and the U.S., including Urban Meadows Property Maintenance Group in Ayr, Ontario, currently use Smart Scale.

Urban Meadows owner, William Jordan, met Omer in the early testing phase of Smart Scale and the startup phase of Omer’s company, Viaesys. As the first contractor to test Smart Scale, he quickly learned there were times his company was using too much salt.

“The accuracy rate wasn’t there at all,” said Jordan. “We’re now able to accurately monitor salt usage, prevent excessive material use, keep bullet-proof records of our work and job-cost a lot better. The real time tracking of salt has helped us use up to 30 per cent less salt.”

Smart Scale is now installed on all four of his company’s trucks which service 75 properties in Cambridge and Ayr, including parking lots for grocery stores and post offices.

Jordan, who is also chair of the snow and ice committee management sector for the horticultural trade association, Landscape Ontario, says he quickly jumped on board with Omer’s research and would like to see Smart Scale change the way salt is applied across Ontario. With no industry standards for salt application currently in place, Smart Scale could make this possible.

Neverfrost is part of the University of Waterloo’s VeloCity startup incubator program and recently won two $1,000 grants at a VeloCity Fund Finals competition held in July. Neverfrost is set to one of the first companies to operate out of the new VeloCity Foundry – a workspace that will provide hardware-based startups with VeloCity programming, plus free access to machinery, tools, and prototyping equipment; and testing, wet lab and assembly space.