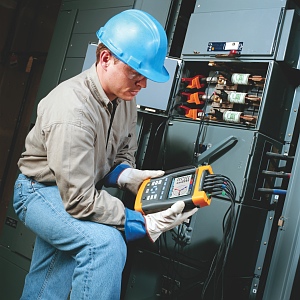 Fluke Corp. introduces the 430 Series II three-phase power quality analyzers, "the first tools to use a patented algorithm to measure energy waste and quantify its cost," the company says. It helps facilities reduce electrical power consumption and improve the performance and lifespan of electro-mechanical equipment by providing the ROI justification to mitigate power quality distortion.

With the new, patented Unified Power function of the 430 Series II, electricians, utility technicians, electrical engineers, field service technicians and energy consultants can automatically determine how much power is being wasted and calculate exactly what the extra consumption costs are with a single handheld tool.

In particular, they allow facilities to assess the impact of new energy-efficient, electronically-driven systems from lighting to motor controls to HVAC. While these new models consume less energy as individual installations, they increase the level of power quality disturbance in the overall electrical system, increasing waste energy due to harmonics and reducing the total potential energy savings. The Fluke 430 Series II calculates the monetary cost of that waste energy.

Long the most popular three-phase power quality analyzers on the market because of their simultaneous display-and-record capabilities, the updated 430 Series II models feature three new measurement functions as well as hardware, software and firmware improvements. New models have up to 32 GB (8 GB standard) memory, a swappable SD memory card and USB connectivity for longer power and energy logging and faster data download. Screen quality and battery life are both improved and the accompanying software has been redesigned to give users more options to analyze both power quality and power consumption.

Both models are fully compliant with the stringent international IEC 61000-4-30 Class-A standard. Each one can monitor systems with up to ten power quality parameters on one screen and can record up to 150 parameters on 4 phases simultaneously, in accordance with the EN50160 standard, and are safety rated 600 V CAT IV/1000 V CAT III.

NEW, patented, Unified Power measurement function
From an algorithm first developed by Vincente Leon and Joaquín Montañana of the University of Valencia Polytechnic as an extension to the  IEEE standard 1459, the patented Unified Power function on the 430 Series II was developed in cooperation between Fluke Corporation engineers and University of Valencia scientists. Unified Power marks the first time that any test tool has provided the ability to automatically quantify the energy wasted by harmonics and unbalance, and by inputting the utility rate structure, the user can even calculate the monetary cost of the wasted energy.

NEW Inverter Efficiency measurement function
The 430 Series II Inverter Efficiency function simultaneously measures the input and output power of inverters in solar systems, wind turbines and uninterrupted power supplies, allowing the operator to see how much electricity the inverter itself is consuming and whether it is operating efficiently. The measurements enable operators to adjust settings or make a case for a replacement unit.

NEW Power Wave measurement function
The 435 model includes PowerWave, a “fast capture” system that displays waveforms and half cycle RMS voltage and current values in full detail so motor and generator operators can measure the interaction during switching operations. This allows facility and utility service electricians, electrical contractors, and generator suppliers to easily gather measurements with one tool for load profiling, to prevent motor/drive/load mismatches, and for motor and generator commissioning and start-up testing.
www.flukecanada.ca