Chilling Down: Precision cooling more than 146,000 cubic feet of beer 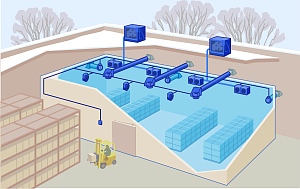 Boston-based Harpoon Brewery has been brewing award-winning craft beers since1986. To keep up with growing demand, Harpoon purchased a second brewery in Windsor, Vt. Both the Boston and the Vermont warehouses use Freeaire systems to keep their product cool.

“Beer is a perishable product, and the longer we keep it cold, the longer it stays fresh,” explains Steve Miller, general manager of Harpoon’s Windsor brewery. “Our cooling has to be reliable.”

When the folks at Harpoon saw the potential payback on a Freeaire system, they wanted it installed and running as quickly as possible. But an operation like this one can’t afford delays and hold-ups. The installation was easy, on time, and as planned.

Miller says, “Our installation was a great experience. It didn’t disrupt our normal operations. It happened really quickly — they were able to get the pieces needed in short order and have it up and running in a very reasonable amount of time.”

Results for the Boston and Windsor warehouses combined equaled a total annual cost savings of US$16,237. The total energy savings was 111,780 KW/h.

Harpoon particularly likes the automatic defrost cycle, made possible by the Cooler Controller technology. “The system has added defrost to our evaporative units — the Freeaire automatically does it — so we don’t have to turn it off and do it manually,” Miller adds. “We like the convenience.”

Harpoon Brewery couldn’t be happier with the way the new system is saving them money on electric bills. “In the past, the cooler fans were set to run constantly,” he says. “The Freeaire system shuts them down, whether because it’s pulling in cold air from the outside, or because the temperature is being maintained at our set point.”

“And we’re actually seeing the evaporative units turn off even in the warmer months,” Miller adds, “compounding the savings that we’re realizing. By saving all that power, it’s having a positive effect on the environment.”
www.freeaire.com