PEM SALARY SURVEY 2011 – Measuring Up: Pay and job stability in an upswing

Welcome to PEM’s eighth annual salary survey. This year, we continued to receive significant participation from respondents who completed our comprehensive online questionnaire form, and we continue to compare results against previous surveys. Some tables reflect multiple answers and total more than 100 percent. In other tables, categories with a low response were left out and not factored in the overall average to reinforce accuracy. PEM wants to thank the industry stakeholders who took the time to participate; it has helped us to build detailed benchmarks of industry trends, which maintenance professionals, engineers and plant operations can benefit from. 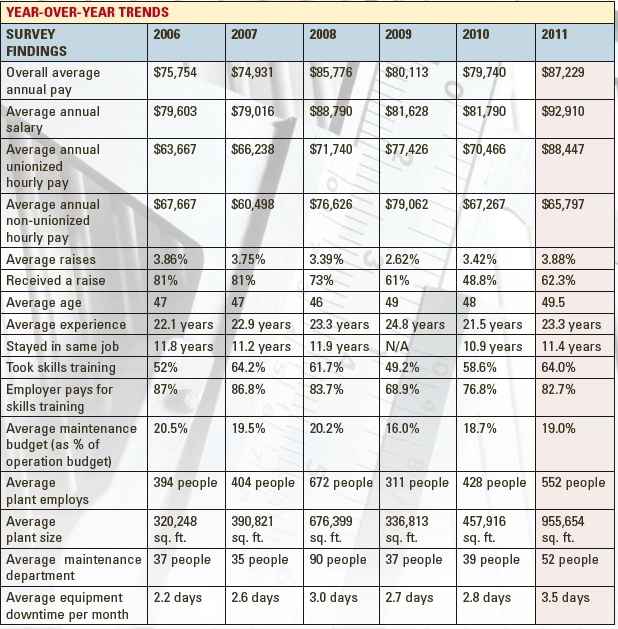 Overall, things are looking up.

Given the economic turmoil that began in the fall of 2008, maintenance professionals and other plant workers had reported relatively stagnant earnings in our 2009 and 2010 results. This year, the survey results remarked a significant uptick. The overall average annual pay is $87,229 compared to last year’s average of $79,740 — a jump of nine percent from year to year.

The numbers are more than any of our previous years’ results — whether this is an anomaly or not, it’s too soon to tell, but things are trending positively in most categories, so it’s safe to assume things are at the very least swinging in a positive direction. Much like the wage spike we saw in 2008 (see table on Page 15), we seem to have tapped higher earners working in larger facilities and managing more people. 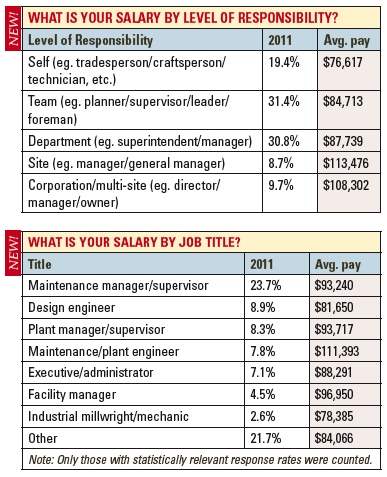 Raises and Expectations
The question of raises proved to be most interesting. In last year’s survey — which seemed to catch the financial effects felt by our respondents during the recession — respondents faced few raises (less than half reported having received one) but remained optimistic about the prospect of future pay increases: 43.4 percent anticipated getting a raise this year, significantly higher than any previous year’s expectations (12.1% in 2008 and 24.5% in 2009). In last year’s report, we predicted this “bodes well for 2011.”

These expectations, it turns out, were well founded: 62.3 percent of maintenance professionals and other plant workers got a raise this year, close to par with 2008, but still down from earlier years. Those that did see an increase saw increases of close to four percent (3.88%), the highest since we started keeping track. Looking to 2012, those anticipating raises are similar to last year, so hopefully the trend continued to tick upward. 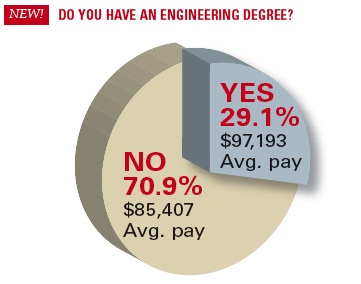 Responsibility, Education, Training
This year, we broke our results down even further, examining the average annual pay by level of responsibility, by job title and by levels of training and education. The results, unsurprisingly, show that the more people one has working for them, the more money they make.
Those responsible for one or multiple sites, such as a general manager, director or owner, hit above an average annual pay of more than $100,000. Department heads (like a superintendent or manager) hit around $87,739, and team leaders (such as a supervisor, foreman or planner) get around $84,713. Those with little to no responsibility beyond their job, such as a tradesperson or technician, were the lowest at $76,617. Digging deeper, we also examined the results by job title. See the detailed breakdown in the chart.

Level of education, understandably, has an effect on how much you’re paid, and the distinctions couldn’t be clearer. Those with a high school diploma as their highest level of education take in an average annual pay of $79,826. Those will a college degree get $85,634 while university graduates land around $96,526. Similarly, those with an engineering degree make more than $10,000 more than those without one ($97,193 versus $85,407).

Training will make you valuable, too. Those with an industry certificate, such as the Plant Engineering and Maintenance Association of Canada’s Maintenance Management Professional (MMP) program, hit annual hauls just above $100,000; those without are around $83,566.

The further we get from the 2008 meltdown, the more optimistic workers are about staying in their current positions. Are respondents concerned about being laid off? A total of 10.8 percent ($80,025) say they’re concerned, down from 14.7 percent in 2010 and 19.2 percent in 2009. The richest group were those not concerned about layoffs ($93,065), making up a total of 74.0 percent of respondents, nearly 10 percent higher than last year’s figure of 65.1 percent and 2009’s 54.7 percent. Those respondents ($73,972) who said they’re unsure about their continued employment made up 15.2 percent of the total group. This is down from 20.2 percent reported in the same category last year. 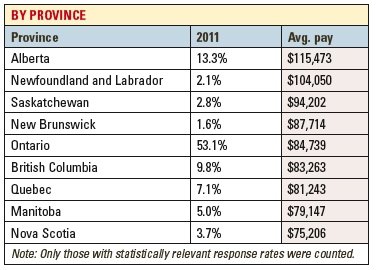 Hourly unionized and non-unionized respondents reported earnings either equal or higher than last year’s (which had dipped significantly from the years before). Non-unionized hourly respondents averaged $65,797 (merely 2.2 percent less than last year). Union-hourly respondents averaged $88,447 (25.5 percent more than in 2010). In terms of this year’s survey, salaried employees constituted 77.2 percent of respondents. Non-union hourly employees came in at 14.4 percent, while union-hourly employees comprised 8.4 percent of the total group.