Need for Speed: Hydraulic motor boosts efficiency in potash mine

Work output in a potash mine is dependent on machines with high mobility and production efficiency. As the world’s demand increases for potash that is used primarily as an agriculture fertilizer, Saskatchewan’s PotashCorp has stepped up production at the company’s Rocanville, Sask., mining facility with a continuous bore mining machine that extracts some 1,200 tons of potash ore per hour. 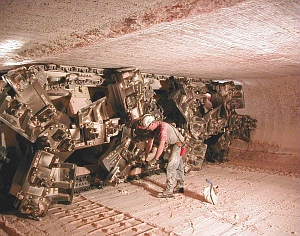 Propelling the massive four-rotor mining machine, weighing in at 250 tons, are two Eaton Hydrokraft 250-cc motors that are the heart of the hydraulic system on the X CEL 44 Series miner built by Prairie Machine & Parts Manufacturing Ltd. in Saskatoon.

PotashCorp has relied on Regina’s HyPOWER Systems Inc., an Eaton distributor, to provide hydraulics muscle and hydraulics commonality for its mining machinery. When the need for an additional miner became evident, PotashCorp asked HyPOWER to redesign hydraulic circuitry for the machine and to work with Prairie Machine on fit, functionality and integration requirements.

“We explained to Lyle that the motors would need to increase tram speed over PotashCorp’s current miners that move at a snail’s pace through the mine,” Ganshorn says, “plus fit into a tight envelope on the miner.

“In addition, the motors would need to default to maximum displacement, in the event that hydraulic system pilot pressure was lost.”

Meyer proposed Eaton’s compact Hydrokraft two-speed motor for the application, after confirming with Eaton’s Wehrheim, Germany, manufacturing facility that a customized version would default to maximum displacement, not minimum displacement, as does the standard version, when pilot pressure is lost. Ganshorn specified the custom Hydrokraft motors into his hydraulic system design proposal that also included Eaton DG4S4 valves, V Series vane pumps and a Series 2 piston pump that would operate auxiliary functions.

PotashCorp liked the design proposal and gave HyPOWER its endorsement to design the miner’s hydraulic system around the custom Hydrokraft motor.

Following assembly and testing, the miner was completely disassembled in order to be transported down the mine shaft. Simultaneous with these projects was the task of carving out rock 3,200 feet below the Saskatchewan prairie in order to build a shop in which to reassemble the 38-foot-long by 22-foot-wide miner piece by piece. Overall, the multimillion-dollar investment is already paying off for PotashCorp. The machine has been up and running since November 2009 and is significantly faster than the elder PotashCorp miners.

The increased tram speed saves two hours of tram time and more, says PotashCorp’s Cecil Huber, general maintenance foreman underground. “The time savings frees up the operator to help with setup sooner and allows us to move the electrical set that much sooner as well,” he says.

“Eaton’s Hydrokraft motors give us twice the drive torque to the tracks, which results in better control. Tram pressures are lower, resulting in lower operating temperatures in the hydraulic system.”

This is an edited article provided by Eaton’s Hydraulic Group. For more information, visit www.eaton.com.
Print this page