Energy efficiency is the key to a sustainable future. Lowering consumption reduces green house gas emissions and the resulting savings can be used to upgrade existing equipment.

One Quebec-based facility knows this first hand. For a five-year period ending this year, the Sainte-Justine University Hospital Center in Montreal implemented an ambitious project that reduced natural gas consumption by nearly 50 percent while maintaining indoor comfort — a priority for any health-care facility.

Built in 1907, Sainte-Justine is a 120,000-square-metres building. It houses the largest pediatric health centre in Canada, a research centre, a surgical suite, an analysis centre, 450 patient units, neonatology research and qualified operating staff. Before the energy efficiency project, it was heated using natural gas boilers and it drew its electricity from the national power grid. In all, the building’s energy costs were originally $3.9 million per year. 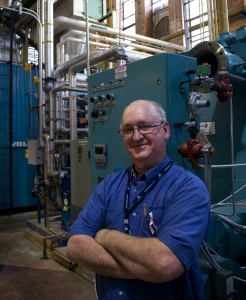 Something needed to change. The goal was to reduce energy consumption by converting the steam-heating system to a centralized low-temperature network. The centre’s new water-heating network now makes full use of its heat-recovery potential to supply heat to most areas that don’t require steam. The optimized condensing-stack, heat-recovery system boosts boiler-room efficiency and cuts energy use.

Additionally, a complete recommissioning of the building’s automation systems was completed to balance its air intake and exhaust, reduce airflow during unoccupied periods and adjust fresh air to occupation levels using CO2 sensors.

Two piping networks were also installed, one for the chilled water and a second for heated water, each running parallel to the existing steam network (now used less frequently). New boilers were installed to produce hot water, replacing a steam boiler that was reaching the end of its life cycle. Furthermore, a heat pump was installed to recover the internal heat produced inside the building and distribute it to the perimeter of the building. The existing steam network was kept for sterilization and humidification, but its use is greatly reduced as the new centralized hot-water network directly supplies all the heating loads.

Maintenance is also easier as all the new equipment can be placed in the same location. The new piping allows for the removal of excess steam piping, pressure reducing valves and steam traps. These operate at high temperatures and, in older buildings, they may also have deficient insulation, which leads to significant thermal loss in the cooling season because heat stays in the building and adds to the cooling load.

A Handy Chiller
A chiller is typically used to cool indoor air during the summer and release the heat outdoors, often using cooling towers. A chiller and heat pump system provides both heating and cooling, reducing CO2 emissions and building maintenance — even during the spring and fall.
A big chunk of the savings from the Sainte-Justine project came from both using a heat-recovery chiller for heating instead of a natural-gas boiler and recovering heat usually ejected from the building. For example, during the summer, heat produced by the chiller can now be used to preheat domestic hot water.

In winter, many additional energy sources are available for heating, from the heat in the air exhausted by ventilation systems to the heat produced by compressors and electrical rooms. Using the chiller and heat pump can generate significant savings as long as there is a sufficient heat load. Since it recovers more heat than the electrical input needed to run the chiller, the resulting efficiency for heating is between 300 and 400 percent.

For Sainte-Justine, a modular chiller system was selected. With the ability to operate each of its seven modules independently using a master controller, this chiller has the ability to run at as low as five percent of its nominal capacity of 1,700 kW. It also provides redundancy: if one module fails, the other six can take over. Furthermore, each module can be isolated and removed for servicing, reducing the effects of downtime.

Because the new chiller operates in the winter, it can release its heat without a cooling tower, which minimizes the risk of freezing in mid-season. It also reduces the need for scattered direct-expansion units for cooling during the winter.

Furthermore, a steam system requires more parts than a hot-water network. Steam traps, condensate tanks and pressure reducing valves all require maintenance to prevent failure and steam losses. Even in the best-preserved network, between four and nine percent of all the steam produced is lost to the atmosphere. Converting most of the heat load into hot water eliminates these losses.

In addition to the new heat-recovery chiller, two new hot-water boilers were also installed at Sainte-Justine to maintain redundancy and supply the building’s required heating capacity. Having a low-temperature hot-water network also increases the efficiency of the hot-water boilers. Low-temperature return is used in a condensing-stack heat-recovery system, which raises the boilers’ efficiency to the same level as condensing boilers (95 percent compared to 80 percent for conventional boilers). Some heat exchangers were kept on the steam network to provide additional redundancy, but they are only used as back ups.

Variable frequency drives were also installed on all the major hydronic pumps. This lets the pump motor modulate power to provide only the necessary flow for the current load. The hospital has realized significant savings and optimized its operating conditions.

Working Together, Step by Step
These measures save significant energy costs each year, but it’s important to ensure the project is a success not only for its first year but also for the next 25 years. For this reason, consulting firm Ecosystem Energy Services Inc. — which did the design and engineering of the project — also built it, installed the equipment and made sure it operates. This Montreal-based firm is taking responsibility for annual savings, working closely with staff and optimizing the equipment.

“This long-term partnership between the building operators and the consulting firm makes for a healthy and positive atmosphere,” says Fernand Lavallée, site supervisor with Ecosystem. “As much as the maintenance staff wants everything to be working correctly, the consultants want to make sure all the equipment work efficiently,” so they work together, solving and preventing operating problems.

He is also a permanent fixture at the project site, working with the Sainte-Justine operating staff, the subcontractors and Ecosystem’s construction manager. It’s a partnership that works since no one knows the building better than the operating site maintenance staff — and no one knows how to increase the efficiency better than a specialized energy firm like Ecosystem. At Sainte-Justine, this partnership results in savings of more than $1 million every year.

“Our best accomplishment in this project is to see that everyone in on the same side, helping us helping them,” Lavallée says. “It is very stimulating to see the people so proud of the project, because everyone took part in it.”

In addition to monetary savings, greenhouse gases have been reduced by 5,196 tons of CO2 per year, 50 percent of the building’s carbon footprint.

Once the initial project is completed, the savings can be put toward additional improvements to the HVAC system, either adding even more efficiency or replacing more old equipment and maintaining the quality of the building mechanics. The hospital is also already considering a second project: adding a geothermal heat pump and replacing another of its old steam boilers with more hot water boilers.

When confronted with multiple maintenance problems in older buildings, it pays to find out if an energy efficiency project could be part of the solution.