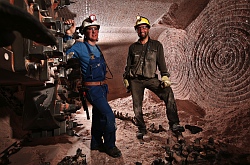 In an effort to support mobility and retention within this sector, such talents will now be officially documented and recognized through a newly started mining-credentials program.

Employees from seven different mine sites across Canada are the first group of mining workers to receive national certification through the Canadian Mining Credentials Program. A collaborative effort by mining employers, employees, educators and other stakeholders spearheaded by the Mining Industry Human Resources Council (MiHR), the program is the cornerstone of the mining industry’s efforts to recognize the skills, knowledge and experience of its workforce.

The group represents a selection of Canada’s first underground miners, surface miners and minerals processing operators to achieve nationally recognized certification. This is an historic event in Canadian mining because, until now, unlike the trades, skilled workers in these occupations have never before been awarded an industry-recognized credential that supports mobility and retention within the mining workforce.

The certification program was founded on a set of industry-developed National Occupational Standards, which have been developed for three key mining occupational areas: underground miner; surface miner and minerals processing operator; and diamond driller. A needs assessment will be conducted in the future to determine the requirements for new National Occupational Standards. MiHR is hoping to test certification for diamond drillers in late 2011.

The first of its kind for this country’s mining industry, the certification program requires workplace demonstration of employees’ skills and provides these workers with portable credentials based on their experience and competency levels.

“For decades, mining has played catch up to a number of competing industries that have clearly defined career paths and skill sets and competencies that are recognized and valued,” explains Ryan Montpellier, executive director of the MiHR Council. “Mining workers are highly skilled, working with multi-million dollar equipment and operating in a complex environment, yet their skills and competencies have gone, for the most part, unrecognized, and certification is going to change that.”

The certification pilot program began in 2010 at seven mine sites across Canada with the identification and training of workplace assessors, the creation of assessment tools and the testing and evaluation of the program. More than 100 workers were certified in this pilot at the following locations:

According to the pilot program’s participants, certification is something both employers and workers have been waiting for.

“Unlike a tradesperson that goes through an apprenticeship to gain their qualifications nationally or provincially, equipment operators have to endure the same training over and over every time they start with a new company. For some, this can be frustrating because they have done the same job for many years,” explains Jerrold Jewsbury, safety coordinator for Kemess Mine.

“Through the MiHR certification process, the equipment operators have a similar opportunity as the trades to carry a [nationally recognized credential] in their profession, giving them the recognition that they have earned and deserve for the past many years in the industry,” he adds. “By working together with MiHR, we are bringing a sense of pride and accomplishment back into the workforce.”

Jewsbury, also the site’s workplace assessor in the pilot program, says certification will have a positive impact on Kemess employees as they begin transitioning to new jobs when the mine, which has been operating for 14 years, stops production and closes in mid-2011.

Rick Gibson, superintendent of mill operations at Teck Highland Valley Copper, agrees that certification will benefit both workers and companies, as it provides employers confidence when hiring new employees that they have demonstrated skills to a nationwide competency standard. “As well, certified workers have portable credentials that will improve their employability at mines across the country,” he says.

MiHR’s latest research estimates that between now and 2020 the mining industry will require approximately 100,000 workers to support growth in the industry and replace retiring workers. Approximately 20 percent of these new hires will be required in skilled occupations that have, until now, lacked a national recognition system, including production miners, development miners, heavy equipment operators and mill operators.

The certification program will be an essential component in increasing and retaining the valuable skills required to keep the mining industry sustainable. Without a formal credentialing framework for these jobs, employers may struggle to evaluate the qualifications of experienced candidates and may end up wasting time and resources retraining new hires in areas where they have already demonstrated competency in the workplace. Furthermore, employees with skills sets that are not recognized by their industry can become frustrated and may seek opportunities elsewhere. A recent MiHR survey of mining industry employers revealed that turnover in these occupations is almost twice as high as other mining sector jobs.

“Certification is a means of recognizing that the worker has met the National Occupational Standards for the industry, as designed and validated by mining employers across Canada. It is very important to industry that workers can now be measured using the same standard, allowing us to quickly identify training needs and hire workers with proven experience,” explains Denis Beaudoin, corporate director of health and safety at Cementation Canada Inc.

Local recognition ceremonies took place between February and April 2011 for each of the pilot sites to celebrate the achievements of program participants and to award certificates. All certified workers received a certificate, wallet card, lapel pin and a skills passport documenting their skills and competencies. These local events fostered a sense of accomplishment and mounting excitement about the opportunities certification will create for workers.

“The common denominator was the look of pride and strong sense of recognition on the part of each recipient, as well as the employer. At several events, children of the certificate recipients expressed newfound respect for their parents’ work,” explains Barbara Kirby, MiHR’s senior director of workforce development, who is leading the development of the program and attended each of the recognition events. “It was very moving and touching to be a part of each of these recognition events.

“The certification program sends a clear message to Canadians that if you work in mining you will have a recognized and valued career — not just a job.”

MiHR’s current plan is to begin a pan-Canadian rollout of the program in the fall of 2011.

Lindsay Forcellini is the marketing and communications coordinator with the Mining Industry Human Resources Council (MiHR). For more information on the certification program, email certification@mihr.ca or visit www.mihr.ca.
Print this page