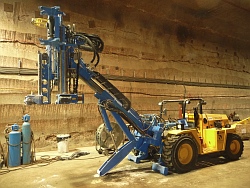 After a year and a half of development, Saskatoon-based DynaIndustrial recently created a custom piece of equipment at the request of PotashCorp for its expanding Rocanville, Sask., potash mine. The low-ceiling-height roof bolter, named the DynaBolter, is used to secure potash mine ceilings, eliminating the need for a worker to manually install roof bolts.

Since 1970, DynaIndustrial been focused on helping companies in various industries improve their process productivity by designing and developing custom equipment, primarily serving steel mills, pipe mills, and mining and oil and gas companies.

DynaIndustrial recently completed the design and prototyping of a custom roof bolter at the request of PotashCorp’s Rocanville mine located in Southern Saskatchewan. DynaIndustrial spent the last year and a half developing the DynaBolter to fit the expanding mine’s specific underground requirements.

“Many meetings were held to refine the details of the equipment and their requirements,” DynaIndustrial general manager Darrin Craig said. “DynaIndustrial modeled the bolter and used that model as the basis for most of the meetings. Both maintenance and operations staff at the mine were involved in the meetings to provide their input on the design. After the machine was delivered, a number of changes were made to improve the functionality and reliability of the machine.

“We are frequently in contact with the mine on the bolter to provide training of new personnel and update or modify the machine as required.”
Currently, the company has four different models at various stages of development and is working with several other potash mines to develop a bolter to meet their specific requirements. Agrium Potash Corp. in Calgary and Mosaic Potash in Saskatchewan have also just purchased the newly created piece of machinery for their underground mines.

According to DynaIndustrial, the DynaBolter significantly improves the safety and efficiency of the bolt installation process, and the machine can be adapted to different applications from its original intended use. The equipment eliminates the need for a worker to manually install roof bolts. Instead, a single operator can now drill and install up to five bolts from their seat.

“The reason that mines use roof bolters is to stabilize the back (or roof) of the mine to prevent cave-ins or loose rock or potash from falling,” Craig says of the technology’s purpose.

Prior to the new equipment, safety concerns came into play because the task of drilling through loose or unstable back can cause rock to fall. “In certain situations with existing equipment, personnel are directly under where they are drilling and bolting thus being exposed to falling rock,” he explains. With the DynaBolter, the work is done 15 feet away from where the drilling or bolting is taking place.

“The cab is certified for falling object and roll-over protection to protect the operator,” Craig adds. “Thus, the operator is not exposed the hazards.”
Features also include a “state-of-the-art” hydraulic control panel that has on-screen tutorials, making training and operating simple for any worker. The machine runs on diesel and is extremely agile for its low profile. The DynaBolter can be integrated onto existing pieces of equipment that mines are already using.

Additionally, “the DynaBolter would not have been possible without the co-operation and support of the Rocanville potash mine and the efforts of the dedicated personnel at this mine,” the company said in a press announcement.
www.dynaindustrial.com