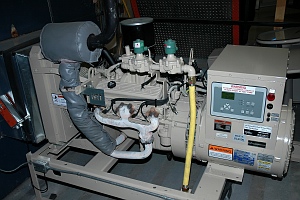 When the power goes out and the building goes dark, business comes to a screeching halt. However, it remains business as usual for an Ontario pharmaceutical company thanks to a newly installed generator housed inside its operation’s building in Mississauga.

This is a privately held company (unnamed in this feature), specializing in the development, production, marketing and distribution of essential hospital and retail pharmacy products to the Canadian health-care market. It produces several temperature-sensitive pharmaceuticals that must be stored in a refrigerated environment of 2ºC to 8ºC.

The product is manufactured off site and is delivered to this distribution centre where it is reshipped inside temperature-controlled trucks. From there, it goes straight into a refrigerator. It is then sorted and packaged into Styrofoam containers for shipment while still inside the refrigeration unit.

Since the 1990s, this organization has dedicated itself to the maintenance, promotion and reinvigoration of niche pharmaceutical products essential to the Canadian health-care system. As such, it is equally dedicated to supplying its products to the people who depend on them — no matter what. This was the motivating factor in the company’s decision to invest in a back-up generator for its building.

Three years ago, the company purchased a walk-in refrigerator manufactured by Foster Refrigeration in Drummondville, Que., to store its sensitive product. Prior to that, it was using small sliding-door refrigerators. A company that provides specialized products and services to companies working in the biotechnology, pharmaceutical and industrial research sectors sourced and validated the walk-in refrigerator. However, more importantly, it recommended the company should also complement it with a backup generator: “The power doesn’t go out that often, but if it ever did happen, we would need power backup for the fridge.”

The company’s referral led to Sommers Motor Generator Sales in Tavistock, Ont., a manufacturer of generator systems up to 2,000 kW for stand-by and prime power applications.

Although the job was tendered with three separate bids vying for it, other factors needed to be considered in addition to price. “A lot of it is based on how confident I am that they will support whatever our needs are after the generator is installed,” said a representative of the company. “There were some companies that just want to sell you a product, whatever that item is, but afterwards you might find that they don’t have the best service. However, after speaking with Chris McGregor from Sommers and the people that he works with, I was confident that they would be there for us. That was very important in this situation, especially for an item that needs to work the way that we need it to work.”

Sommers provided a turnkey package, part of the process to assess the company’s needs prior to setting up the generator. “There were a lot of key details that were discussed; for example, they lease this space and if they ever moved, they would want to take the fridge and generator with them,” McGregor says. Additionally, there were other details that needed to be considered. “Originally, they thought they needed to place the generator outside, and that would have been fine because we can provide an enclosure that would protect it from the elements, but they were better off with it inside since they had the space for it,” he says. “So it was ideal for them to have it inside where it they can monitor it.”

While the generator’s primary application is to back up the walk-in refrigerator, it will also provide power to the rest of the building in case of a power outage. “The generator is actually a little larger than we need, but again the purpose of getting a generator of that size was that if we moved to a larger building, we can still use that generator without scaling up. And that was one of the details that we discussed with them as well.” As it was explained by McGregor, “Moving to a space twice as large doesn’t mean they will need double the energy.”

Not everything the company produces needs refrigeration but that too might change in the future. Its refrigerator is designed to be expanded so the generator was also sized to provide backup power to a larger refrigeration unit when the company’s product line offering increases. “These are just some of the things that were brought up during our discussions.”

Business as Usual
Although blackouts are few and far between, McGregor says the generator has empowered the company to take control of a situation that is otherwise uncontrollable. If the refrigerator malfunctioned, a repair technician can be called in to fix it. If the power goes out, there are no other options but to wait for it to come back online. “Prior to getting the generator, their backup procedure would be to ship the product to another facility for storage.”

Unlike larger companies and labs where there are staff in the building around the clock to intervene, this is not a 24/7 operation and their employees wouldn’t know the power went out after business hours until the next morning. “If the power goes out over a weekend or even a long-weekend, we know that the generator will kick in,” McGregor explains. “The generator is hooked up to the alarm system so when it does kick in, the alarm system notifies them.”

Ultimately, having a backup generator is providing more than just emergency power. “It gives them peace of mind and a great deal of confidence. That’s what it comes down to: you want to be able to carry on with business as usual,” McGregor says.  p