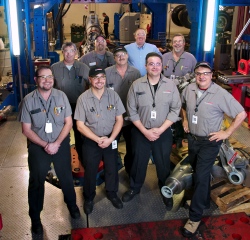 Whether taking off or landing, literally everything is riding on the performance of an airplane’s landing gears.

For Goodrich Corp.’s Landing Gear division, success is measured by every uneventful takeoff and landing its clients make, including customers like Airbus, Boeing, Bombardier, Cessna, Gulfstream and the U.S. government. Overall, the company supports commercial, military, regional helicopter and business customers throughout the world.

Goodrich’s Oakville, Ont., location manufactures 11 different landing gear assemblies, including one for the Airbus A380 super-jumbo airliner, which, at 18½ feet tall, must support nearly 170 tons — the equivalent of five blue whales. Its main landing gear is composed of four main undercarriages, two with four wheels each and two with six wheels each.

There are more than 875 employees at this location alone, with workers flowing in an out of all the testing bays, shop floors and offices in the sprawling 400,000-square-foot, two-storey facility right off Highway 403.

How does it all keep running smoothly? It’s due in part to a group of 17 maintenance team members, who keep more than 500 pieces of equipment — including but not limited to CNC machine tools, plating lines, test cells, hydraulic pump rooms, chillers, scrubbers, overhead cranes, HVAC systems, ovens, boilers and compressors — in working order. 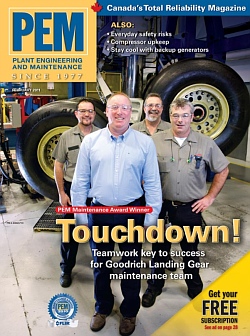 Staying engaged
Shawn Larkin, facilities and maintenance manager at the Oakville location, explains that having a group of committed and cooperative workers is critical to getting the job done, day in and day out. “An engaged maintenance department is important to a company because the skills our team brings are critical to shipping a quality product on time,” he says.

Fostering team engagement includes developing emotional attachment to the work at hand, creating a sense of belonging, providing training and involving employees. Facilities and maintenance supervisor Paul Kinsella explains: “Teams that are actively engaged help move the company forward. Most highly engaged employees believe they can positively impact the quality of their company’s products. Involving the employees brings along a sense of belonging, trust and usually a more positive attitude.”

All in all, he says, keeping the team engaged is a win-win situation for the department and for the company. “A committed employee contributes with pride to the company’s goals and objectives, visions and successes and will take great care to protect the company.”

“These are usually quick 10-minute meetings,” Kinsella says. “After these meetings, the maintenance team assembles in the maintenance office to review any issues, concerns, opportunities, machine-down information and also to have our own LDMS meeting. All team members contribute to the meeting and … the maintenance supervisor prioritizes the daily goals. We also discuss the planned PMs for the day and any changes that may have to be made.”

The company also says it reduced unscheduled downtime with an improved preventive maintenance (PM) program, which involves much more than changing oil and filters.

“We were cleaning and finding things that normally we wouldn’t find, like loose nuts and bolts,” mechanical technician and team member Robert Hamilton says. In some cases, following the OEM’s recommendations, they were able to control down time to the hour by actually putting the machine down during a part change to inspect and document what needed to be done, and then scheduling the work.

“We also implemented predictive maintenance (PdM) tools to make us more aware of potential break downs,” he adds. “Bearing monitoring and proper greasing has been very successful,” which has resulted in their plating scrubber equipment running 24/7/365 for the past six years.

Reducing costs
In most manufacturing facilities across Canada, cost reduction is a universal mantra. At Goodrich, the company claims to have reduced inventory costs through partnerships with outside suppliers and other divisions. Maintaining proper inventories of critical spare parts is paramount to get products assembled and shipped in a timely manner. Not ensuring the availability of much-needed parts jeopardizes equipment wellness and can cause a backup in resource scheduling.

“We significantly reduced cost of spare part management by teaming up with local suppliers and sister companies,” Larkin explains. “We now have 24/7 access to critical components that suppliers stock on our behalf, thus reducing our inventory and costs.”

“We also cross reference common devices used on the equipment with our local suppliers to ensure parts are readily available.”

As is the reality these days, this division’s maintenance budget was reduced — but production increased at the same time, a feat Larkin says couldn’t have been done without the right team members and keeping services in house.

“We reduced contractor involvement and the maintenance department technicians took on more responsibilities and implemented numerous cost-saving initiatives, such as electronic component repairs and complex spindle repairs performed in house versus contracting out.” 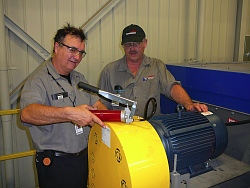 THE OAKVILLE FACILITY IS CONSTANTLY ABUZZ with activity. To get to the maintenance team’s offices, one must follow a zigzagging, taped-off pathway through the main manufacturing bay, past spinning and whirring machines and bubbling plating tanks. With everything in full swing, a safety alarm sounds to alert workers that an overhead crane is in operation, hoisting and transporting a newly machined, 3,000-pound landing gear cylinder across the shop floor. Underneath this, a Droop + Rein CNC milling machine carves away at a similar outer cylinder.

The importance of asset monitoring and maintenance at Goodrich is immediately apparent: there’s a giant, 15-foot whiteboard labeled “Facilities and Maintenance Machine Status” running along a wall close to the entrance. The organized grid is composed of around 70 critical asset numbers and descriptions, each associated with headers such as “Status,” “Safety,” “PM,” “Problem/Issue/Opportunity” and “Countermeasure/Solution.”

The team’s offices are located right in the middle of the action, but are (thankfully) walled off enough to prevent shop-floor noise from penetrating. Here, they plan out their maintenance strategies and ensure that they are continuously improving.

Conserving energy
In the era of tight budgets and government incentives, improving energy efficiency is a great way for a maintenance department to have a direct impact on a company’s bottom line. Goodrich Landing Gear has taken full advantage — and has the successful case studies to prove it. 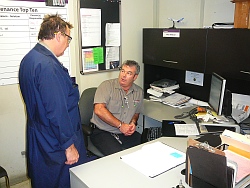 “To improve our energy-saving initiatives, we started off with the ‘big hitters,’ ” Kinsella says, talking about changes made to the motors of its air compressors. “We had two 200-HP air compressors, which had DOL (direct online) starting. As these compressors cycled on and off, we were penalized by the utility for maximum-demand charges. To reduce these charges, we installed ‘soft starts’ (reduced voltage electronic starters).” The company then replaced the two 200-HP motors with high-efficiency motors. “This saved considerable energy costs, and in addition, we took advantage of the Ontario Hydro rebate program,” at savings of $2,400 per motor.

The company realized an annual savings of $9,270 per motor (combined with the rebate) on this initiative alone, providing a return on investment of 4.6 months per motor. “We then mandated that, from now on, all motors above 3 HP would have a reduced voltage means of starting and would be high-efficiency motors,” he adds.

Another “big hitter” project included a retrofit of all air fittings to premium fittings at a cost of $10,000, including parts and labour. “This resulted in annual savings of $46,000 per year and reduced the usage of one 200-HP compressor,” Kinsella says.

This project realized actual savings of $186,000 per year.

The company has also retrofitted all plant lighting from 400-Watt metal halide lighting to electronically controlled, energy-efficient fluorescent lighting and has installed new power-factor-correction and power-conditioning equipment to reduce utility penalties, increase energy savings and reduce damage to sensitive electronic equipment and controls due to poor power. “This project has resulted in annual savings of $200,000,” Kinsella says.

FMEA is a procedure for analysis of potential failure modes within a system, ranked by the severity and likelihood of the failure. A successful FMEA activity helps a team to identify potential failure modes based on past experience with similar products or processes, enabling the team to design those failures out of the system with the minimum of effort and resource expenditure. 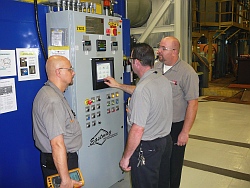 “When Goodrich Landing Gear initially looked at using FEMA as a tool, we went after the machines that were giving us the most problems first,” Babineau elaborates. “For example, we took a large, multi-spindle gantry-style machining centre and broke it down into smaller components and looked at these as stand-alone pieces of equipment to help pinpoint particular problem areas.”

One piece of equipment that was creating a lot of problems — and a lot of down time — was their hydraulic-oil cooling system. “We took a look at everything from its function, function failure, failure mode and, ultimately, the failure effect and what impact that has on our business. After going through these steps, we were able to set up time specific maintenance task, including the use of predictive technologies. In addition, we also set up a very good preventive maintenance program and schedule.”

The company, Babineau adds, was able to almost eliminate unscheduled down time after the introduction of FEMA.

Hamilton says its TPM program — a form of continuous improvement (CI) — helped to increase production capacity at the facility. “The TPM journey started here at Goodrich Landing Gear about 14 years ago, teaching operators, maintenance and management how to participate in understanding the principals of the common sense approach to optimizing equipments uptime,” covering everything from health and safety to energy management.

“This CI tool improved teamwork between team leaders, operators and maintenance personnel, and with that, the cultural change improved our productivity and increased our machine uptime.” 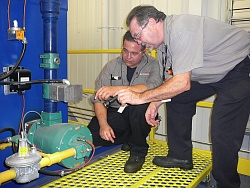 It seems it all goes back to fostering engagement and an emotional attachment to the work at hand, thereby ensuring employees treat the company’s equipment as if it were their own. “How you look after your own personal car is how you would look after your machine: check the oil and kick the tires,” he says. “TPM teaches the awareness that is needed to prevent equipment break downs instead of the equipment having the control.”

The passion in Hamilton’s voice is clear, and he says TPM sets the road map of their job: workers go through each module, step by step, and answer questions. While at first they may not get it, “it builds and builds,” he says. “They start getting more involved and the passion comes out.

“The TPM process brings people closer together,” he explains, illustrating this statement with the story when the team took a ‘before’ and ‘after’ picture of themselves prior to a project. In the before picture, none of the members were close and no one was smiling. In the final picture, with the report done, everybody was laughing, with hands on each others’ shoulders.

“A picture is worth a thousand words, right?” Hamilton says. “The end result is people understood — and they feel good about what they did.”

André Voshart is the editor of PEM.
Print this page