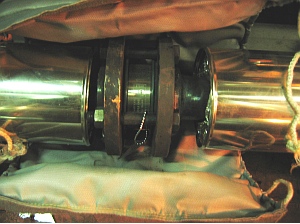 Keeping on top of the constant challenge of repairing and replacing thousands of mechanical steam traps is no longer a problem at KNPC’s Shuaiba Refinery in Kuwait following the successful conversion of 1,750 mechanical traps to Ottawa-based Thermal Energy International Inc.’s award-winning GEM Venturi orifice steam-trap design. As a result, KNPC, a subsidiary of the Kuwait Petroleum Association, has seen the high-pressure (HP) hot condensate header pressure drop from highs of 175 psig (pound-force per square inch gauge) to just 90 psig.

As is the case in oil refineries worldwide, steam is the primary means of transporting energy from the numerous boilers and steam generators to the point of use and is used throughout the oil refinery for applications ranging from trace heating systems designed to keep the product at the correct viscosity to large reboilers consuming many tons of steam per hour.

As the steam gives up its useful heat, it condenses to water. The steam trap’s function is to remove this water and air from the steam pipe-work. At Shuaiba Refinery, the mechanical steam traps were failing at a rate of in excess of 10 percent per annum. Steam traps can fail in either the open position, resulting in the trap passing live steam, or closed, which prevents the discharge of condensate from the system.

When Canada’s was first approached by the Shuaiba Refinery, failed mechanical traps had caused the condensate return pressure to rise to 175 psig, preventing the 150 psig steam stem from being able to discharge. During a recent unplanned boiler outage, the refinery was able to run on just two boilers, which prior to the installation of the GEM Venturi Orifice steam traps would have resulted in a loss of steam pressure to the refinery’s extremities and impacted on production.

“Use of GEM traps has resulted in an 85 psig reduction in the HP hot condensate header pressure as well as steam savings from the reduction in steam loss,” said Habib Atesh, engineering and maintenance manager at Shuaiba Refinery. “In addition, GEM traps are superior as only the strainers require maintenance.”

Instead of utilizing a valve mechanism to close off steam for maximum energy and water conservation, the efficient GEM steam traps use the Venturi orifice design to drain condensate from the steam system. As the GEM steam traps have no moving parts to wedge open or fail, “it provides the ultimate in reliability necessitating only minimal maintenance and requiring no spares, testing or monitoring equipment,” the company says.

Available in a range of sizes for a full cross section of applications, the hardwearing GEM steam traps are manufactured from corrosion resistant stainless steel and are guaranteed for 10 years, eliminating the need for repair or replacement. They can provide a fast payback from reduced energy costs and increased reliability. In addition it can improve product processing by enhancing process control of the cleaning system, and also reducing equipment repairs, downtime and replacement costs.

Sam Mawby is technical director with Thermal Energy International Inc. in Ottawa. For more information, visit www.thermalenergy.com. This was originally published in REM.
Print this page