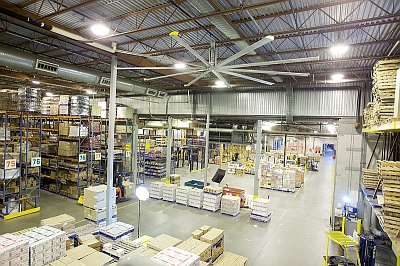 According to Trevor Carlson, environmental and technical services manager at Federated, a fair amount of heat was being wasted at the warehouse ceilings. By bringing this heat downward, he thought, they could decrease the rate at which their buildings were shedding heat through the roofs.

“This data can be used to calculate the heat loss through the building envelope over a given period in the form of a heating index in Btu/ft²/degree day.”

“In the stratified condition, there will be a significant difference in air temperature between floor level and the underside of the roof,” explains Richard Aynsley, lead aerodynamics engineer, Big Ass Fans.

Carlson decided to conduct pilot tests in the 80,000-sq.ft. loading dock area of Federated’s 300,000 sq.ft. warehouse in Saskatoon, Saskatchewan, Canada. He installed five 24 foot-diameter, low-speed Big Ass Fans unit. “After a short period of operation, we noticed multiple benefits,” says Carlson. “The workers in the warehouse actually wanted the temperature decreased in the winter because they were too warm. That was very encouraging for us, as we were able to change the setpoints on the thermostats because the fans were bringing the heat down, keeping workers comfortable while reducing our costs. We looked at our degree-day data and calculated our heating index for the year prior and the year after installing the Big Ass Fans.” Carlson’s findings showed a significant reduction in energy use.

Occupants of existing buildings can obtain fuel use data from their utility companies, while local climate records can provide the average outdoor air temperature during a particular heating season. This data can be used to calculate the heat loss through the building envelope over a given period in the form of a heating index in Btu/ft²/degree day. One degree day is accumulated for each difference of one degree between a day’s average temperature and a reference temperature, typically 65°F.

Carlson tracked data concerning average energy consumption and daily temperature changes from 2007 into 2009. For the Saskatoon facility, the heating index before the installation of the fans was 4.49 Btu/ft²/degree day. The year the fans were installed, consumption decreased to 3.99 Btu/ft²/°F. The following year was the first full year of using the fans, and the heating index was 3.61 Btu/ft²/°F. “We noticed a pretty significant decrease, and it works out to a roughly 10% reduction in natural gas consumption,” says Carlson. “It was a 10% reduction when we saw a 20% increase in natural gas rates. We believe we saved $19,800 in the first year in natural gas consumption as a result of the fans.”