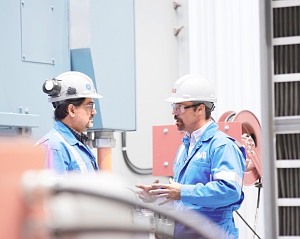 One of the major challenges facing many companies is the selection of an appropriate computerized maintenance management system (CMMS). But how do they determine what the best system is for their organization? Some computer systems are designed specifically for maintenance related activities while others are designed primarily as financial systems. Some CMMS selection decisions are even based on factors that may not necessarily support reliability strategies, asset management or basic user interface — and as a result, more time, effort and money is spent trying to complete reliability goals and improve overall performance.

The following step-by-step guide (spun off from the successes of an implementation with worldwide metal manufacturer Timken Steel) will help any organization through the selection process.

1. Review current system.
Two major reasons drive the need for a company to select a new platform. Firstly, the current CMMS was older-version software no longer being supported by the vendor; consequently any software issues would require internal IT effort. The second reason was the limited capabilities of the current CMMS, such as the data analysis, which was executed by a third-party software package.

2. Form selection committee.
Seek input from all functions potentially impacted by the CMMS to ensure the system meets user requirements and gains acceptance. At Timken, the committee was made up of cross-functional members, such as the functional owner, super-users, those who depend on current CMMS information and those who support the users/system. This included the maintenance manager, plant manager, reliability manager, maintenance supervisors, reliability analyst, CMMS analyst, manager of indirect purchasing, planners and IT.

Client also elected to seek external support from a consulting organization familiar with CMMS selection, integration and implementation, such as ABB, with the primary responsibility of facilitating the various activities, providing recommendations as needed while inserting reliability engineering concepts allowing for improving productivity and reducing maintenance cost.

5. Develop the topological maps.
The next step was the development of the topological maps going from “as is” to “to be.” This exercise brought a clear view of the complex interfaces and the numerous reports generated, and some current processes were actually limited by the current CMMS capabilities.

6. Define new key requirements.
Business managers had pinpointed prior in-house best-practices improvement initiates, but they had not been implemented due to the limitations of the current CMMS. These became identified as key requirements and were documented to ensure they were addressed during the CMMS evaluations.

7. Communicate.
The information from the previous six steps was used to identify current CMMS gaps and additional functionality required of the new CMMS. This, along with the current support features, key process/program enhancements and project vision/mission, was used to create project-status posters set up at various locations throughout the facility for employees to review and provide feedback.

8. Outline requirements.
A formal document of user requirements was then developed to ensure potential vendors had a clear understanding of the CMMS needs. Some of the areas covered included business support, IT and infrastructure; business economics and cost extractions; maintenance work management; asset management; inventory management; procurement and receipts; and vendor management.

9. Send request for proposal.
A request for proposal was provided to a small group of CMMS solution vendors. Each vendor was asked to provide an on-site demonstration of their system’s capabilities along with the user requirements document. Responses were received and, in some cases, potential vendors provided additional supporting information, which was then reviewed by the committee.

10. Visit third-party facilities.
As an additional source of information for CMMS evaluation, the selection committee set up visits to companies with similar CMMS requirements. The visits were made on handshake agreements to share CMMS information and associated best practices with the sponsoring company.

Each team member had assigned responsibilities to gather specific information. Immediately following each visit, the team gathered for a download of key learning experiences. It highlighted similar issues and learning experiences voiced by the various functional reps within the sponsoring company.

11. View an on-site demo.
One full day was set aside for each vendor to demonstrate its system’s capabilities, attended by all selection committee members who were assigned responsibility of evaluating/scoring the demo. Current CMMS users were also asked to attend the demo at specific times covering their areas of responsibility while completing the same evaluation and scoring sheets.

12. Develop recommendations.
The last step was presenting the committee’s recommendation of CMMS choice to executive management. Adding support to the findings was actual reporting and cause of downtime issues. The causes of downtime were separated into several categories, including production related, production planning related, raw material related and maintenance related, and was then broken down further to pinpoint the root cause of downtime. It was concluded that a lack of information and/or analysis capabilities resulted in a significant impact to both maintenance costs and loss of sales. The financial impacts with a new CMMS were estimated at a $5.5-million reduction in mA Clearaintenance costs and additional sales of $4 million.

This is an edited article provided by François Dusablon, business development manager of reliability services for ABB in Canada. For more information, email francois.v.dusablon@ca.abb.com. Thanks to Richard Rosales (Senior Manager, ABB) and Steve Smith (Operations Manager, Timken Steel) for their contributions to this feature.
Print this page