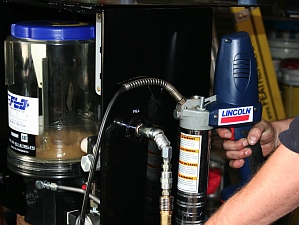 In a study conducted by a major component manufacturer, improper lubrication accounts for 53 percent of all bearing failures — and bearing failures are a major cause of equipment downtime and unnecessary maintenance costs.

The majority of failures are caused by contamination of bushings by dust, dirt and moisture; inadequate amounts of lubricant applied to bearings; or over-lubrication of key pivot points. Costs resulting from inadequate lubrication include replacement bearings, labour to repair or replace bearings, unscheduled downtime and the impact on meeting delivery commitments. Our experience has shown there are five common lubrication mistakes:

1. Not Understanding Greases
• Grease is a solid or semi-solid formed when a thickening agent is dispersed in the base oil.
• Special performance additives give grease its final special properties.
• The composition of grease is about 85 percent base oil with the remaining 15 percent consisting of thickener and additives.
• When looking at the rating of grease, consideration must be given to the base oil viscosity of the lubricant within that grease.
• When selecting a specific grease, other factors may include “pumpability,” thermal and mechanical stability, anti-wear, EP additives, oil bleed, oxidation and water resistance.

2. Incompatibility of Lubricants
When adding a new lubricant, make sure the proposed lubricant is compatible to the current lubricant with respect to thickeners and additives. Check the packaging or contact the manufacturer or distributor to confirm its compatibility. Incompatibility can create internal frictional forces within the bearing, causing heat and potential bearing failure. With automatic lube systems, if the new lube isn’t compatible, users could get plugged lines/metering valves or high pressure, which can lead to system failure. Seal compatibility should also be taken into consideration when selecting or working with a specific grease; failure may result in wear, damage, downtime and lost production.

3. Over and Under-lubrication
While work orders may state a specific number of “shots from a grease gun” to lubricate a bearing, grease guns can have different delivery amounts, not only between different manufacturers but also between different models from the same manufacturer. For example, a standard grease gun delivery is rated as about 30 strokes per ounce. Therefore, higher or lower-volume grease guns could cause damage to a bearing if a calculation of the output per stroke isn’t taken into consideration.

Some people’s solution is to “keep pumping it in until you see it oozing out of the bearing.” Too much grease can be just as harmful as too little (not to mention the waste, clean-up costs and general appearances). Its viscosity can lend itself to more internal friction within a bearing resulting in a buildup of heat. It’s like the difference between trying to stir honey compared to trying to stir peanut butter: the heavier the grease, the more friction there is.

4. Misapplication of Greases
Not following proper procedures when manually connecting and disconnecting a grease gun is another common problem. Hydraulic couplers and fittings are designed to provide a hydraulic seal at any coupler angle up to 15 degrees. Movement beyond this angle will cause the coupler to disengage. A proper procedure should include the following:

• Wipe fittings clean before lubricating.
• Push coupler onto fitting at slight angle and then center coupler on the fitting.
• Operate lever gun handle to lubricate, taking care not to damage seals by excessive pressure or lubricant volume.
• After lubricating, turn coupler at a slight angle to release grip of the coupler jaws.
Improper application could result in the fitting not taking grease properly or frequently damaged fittings and couplers (unnecessary replacement costs and aggravation).

Also important to note is the position of the plunger seal (follower) in the grease gun if switching to grease in bulk instead of cartridges or vice versa. The follower resembles a cup, so when the grease gun is assembled for use with bulk lubricant, the cup has to open toward the head assembly or there won’t be any suction when trying to fill the gun or the grease will bypass the piston when trying to discharge the gun (if the gun container was filled with a filler pump). To convert the grease gun to allow filling from bulk containers or filler pumps, extract the follower and spring from the container tube and flip the follower lip from the rear to the front side.

• Misconception #1 – Automatic lube systems look after themselves. They don’t. Lube systems are another tool designed to help reduce maintenance costs, reduce downtime, improve productivity, increase the life of your equipment, etc., but someone still has to make sure all the lines are connected, there are no leaks and that the pump and the metering valves are still functioning.

• Misconception #2 – Automatic lube systems prime and flush the lines on startup. They don’t. The main purpose of an auto-lube system is to replenish the lubricant used in the bearings. A system dispenses small, measured amounts at specified (timed) intervals — nothing more. Depending on the metering valves to prime and flush the lines on startup while the bearings are running can cause pre-mature wear and bearing failure.