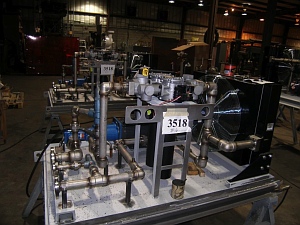 For owners and operators of gearing equipment, the ultimate goal is to achieve a return on investment by maximizing the output, reliability and efficiency while minimizing down time and operating costs. Keys to doing this effectively are understanding your gearing equipment’s lubrication system and ensuring that the system has the correct type and supply of lubrication oil.

VISCOSITY
A variety of criteria must be considered before choosing a gear lubricant: the unit’s operating speed and load, temperature range and lubricant availability, to name a few. However, the most important factor is viscosity, which changes appreciably with temperature and is generally stated at two temperatures, 40°C and 100°C. Lubricating oil viscosity is usually expressed in terms of the time required for a standard quantity of a fluid (at a given temperature) to flow through a standard opening.

High-speed units produce an acceptable oil film at the contact area even with a low-viscosity oil. Gearing units that operate at lower speeds produce a thinner oil film, which requires more viscous oils to separate meshing tooth surfaces. Still, often a gearbox will contain both high and low-speed gear meshes. In general, the lowest viscosity oil capable of forming an adequate oil film at all operating conditions should be chosen. However, in practice, the lubricant chosen is often a compromise between the requirements of the various lubricated components — such as gears and bearings — and the particular application requirements — such as large ambient temperature differentials.

PETROLEUM-BASED OR SYNTHETIC?
Petroleum-based mineral oils are complex mixtures derived from the refining of crude oil and have been found to excel as lubricants in most applications. These oils are usually compounded with different chemical additives to improve specific properties, such as increased lubricant life, resistance to rust and oxidation and increased load-carrying capacity.

Plant managers may also consider synthetic lubricants. Operating parameters may include high-temperature thermal and oxidation stability; low-viscosity variation over a broad temperature range; low-temperature capability; and long service life. Since synthetic lubricants can be up to four times more costly than petroleum-based oils, they are generally reserved for problem applications, such as extremely high or low temperatures, equipment subjected to frequent overloads, and equipment with a marginal lubrication system.

LUBRICATION SYSTEMS
There are two types of gearbox lubrication systems that are in current use: splash and force-feed lubrication systems. Both types are used to distribute sufficient oil to each component of the gearbox while minimizing the generation of heat by oil churning and oil foaming.

• Splash lubrication:
It requires that the gearbox be filled to a specific lubrication oil level, then rotating gear elements within the gearbox dip into the oil and “sling” it into troughs, pockets or directly to bearings and gear meshes requiring lubrication and cooling oil. Feed troughs are employed to capture oil that is “slung” onto the upper gearbox-housing wall by the dipping gear element. This oil drips into the trough, which, in turn, distributes the oil to the bearings.

Splash lubrication systems are far simpler and less expensive than force-feed but are applicable only to low-speed gear units. As shaft operational speeds increase, the heat generated in the gearbox becomes excessive, requiring an external, force-feed lubrication system to supply larger volumes of lubricant to lubricate and cool gearbox components.

• Force-feed lubrication:
A shaft-driven or motor-driven oil pump draws oil from the gearbox sump through a suction pipe. The oil is directed from the pressure side of the oil pump through a filter to cleanse the oil, and through a cooler. A pressure relief valve is typically located before this filter to protect the system from too high an operating pressure. If the filter becomes clogged, the relief valve will permit the unfiltered oil to bypass the filter so the gearbox will continue to receive lubrication, albeit unfiltered.

Relatively little oil is required for lubrication using a force-feed system, provided it is properly directed. The bulk of the oil flow is required for cooling the gear tooth flanks and bearings, not just lubricating.

HEAT REMOVAL
The lubricant’s ability to remove heat and cool the gearing unit is just as important as lubricating gearing and bearings. For every gear drive there is a thermal rating. If the thermal rating is less than the mechanical rating, additional cooling must be supplied by a force-feed lubrication system.

If the lubrication oil alone is unable to remove the necessary amount of heat, auxiliary cooling can be used in combination. For example, to increase the thermal rating of a gearbox with a splash lubrication system, air can be forced past the radiating surfaces of the gear casing by strategically placed fans external to the gearbox. A fan attached to the high-speed pinion shaft external to the gear housing is one such application. In addition, the unit can be cooled by a water jacket, which consists of water passages that are built into the gear housing, usually at the high-speed end.

Understanding these basics can help maintenance technicians and plant managers stay on the forefront of preventive maintenance measures and help extend the lifecycle of their rotating equipment.

Jules DeBaecke is the vice-president of engineering with Philadelphia Gear. For more information, visit www.philagear.com.
Print this page