And the rules can change in a hurry. 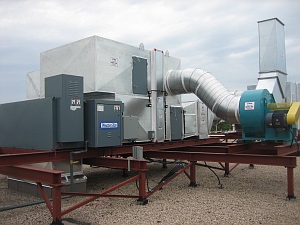 Winnipeg-based fiberglass manufacturer Structural Composite Technology (SCT) discovered, to its surprise, that the Manitoba government had tightened its permissible exposure-level (PEL) requirements for styrene to a remarkably low 20 parts per million (ppm). This was far below the 50 ppm in the U.S. and other parts of Canada and represented a more than 40-percent reduction from previous limits.

“Here in Manitoba, if a plant averages over 20 ppm, the workers must wear a respirator,” SCT president John Zadro says. “When if you were in North Dakota — just south of us — you didn’t have to. And if you were in Ontario or Alberta or Saskatchewan, they didn’t have to either.” To meet these requirements, he installed a state-of-the-art ventilation system when the company moved to a new, larger facility a few years ago.

For manufacturers like Zadro, the first question is where to look. Typically, ventilation systems have been designed and constructed by general HVAC contractors. However, these systems are not designed specifically for the needs of FRP manufacturers. As a result, he selected a system from Louisiana-based Frees Inc., a specialist in ventilation systems for the fiberglass industry for over two decades.

Most ventilation systems depend upon a methodology called dilution to calculate and bring in enough fresh air to dilute the styrene levels to the required levels. Unfortunately, this typically demands a tremendous volume of outside air that must be brought in, heated to 70 to 75 degrees and then exhausted.

According to Zadro, the system he installed is based instead on a directed airflow system designed to ventilate the breathing zone of the worker, not the entire building. The directed air flow system is a proprietary solution that can focus air in a controlled envelope that moves across the breathing zone and then “stops” (to prevent roll back and re-contamination of the work area), is captured and then removed from the area. This system requires about 40 to 60 percent of the air of a conventional ventilation system. Because less air is required, the system demands less equipment, operating costs and maintenance.

Digital controls are another avenue to minimize costs. These intelligent systems can sense styrene-producing activity and ventilate accordingly, resulting in 30 to 60-percent (or more) energy-cost savings. The system automatically cycles equipment off or reduces operation to minimum levels when activity ceases. This can be accomplished in several ways, including motion sensors, monitoring resin flow or other methods. Digital controls also allow fabricators to monitor and control the process through a web browser, to turn aspects of the system on and off, adjust temperatures, change timers, etc.

One of the major benefits is facility cooling and heating to keep the shop at the recommended 70 to 75 degrees. Manitoba winters fall well below zero degrees. The ventilation system uses recaptured heat from the 70-plus-degree air as it leaves the building through heat exchangers to warm the –20-degree outside air to approximately 40 degrees.

“Our utility, Manitoba Hydro, did an energy audit on our system and with the heat exchanger and digital controls and based on incentive programs the utility paid for the first year of our energy system, reducing our payback by a year,” Zadro says.

“Our ventilation system has allowed us to showcase our facility with pride,” he adds.