2010 Salary Survey – Eyes to the Future: Job security is up 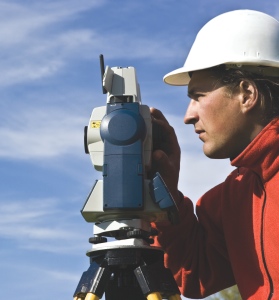 In last year’s results, given the economic turmoil from the fall of 2008, maintenance professionals and other plant workers reported lower average earnings than in 2008. This year, the PEM 2010 salary survey results remained relatively unchanged. The overall average annual pay is $79,740 compared to last year’s average of $80,113 — a loss of less than one percent from year to year.

In this year’s report, we will compare results against previous surveys. Some tables reflect multiple answers and total more than 100 percent. In other tables, categories with a low response were left out and not factored in the overall average to reinforce accuracy. PEM wants to thank the industry stakeholders who took the time to participate: your help enables us to further build out a detailed benchmark of important industry trends from which maintenance professionals, engineers and plant operations can benefit. 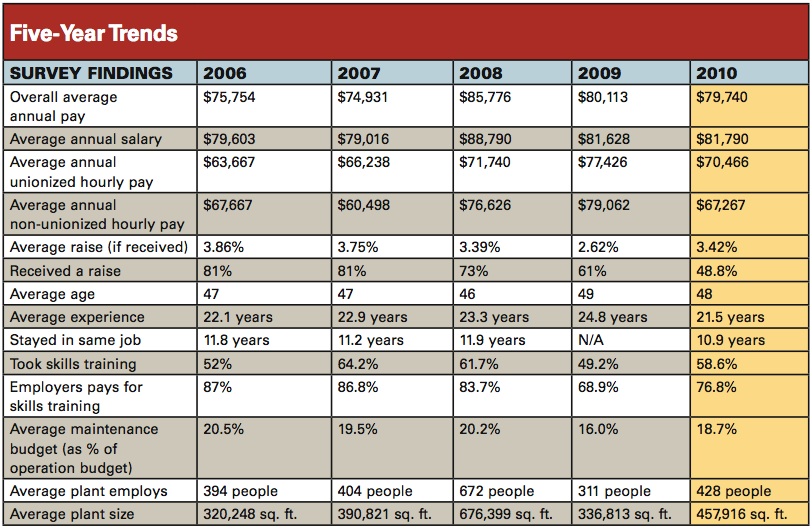 Looking back in time, we can see a steady rise in overall average pay until our 2009 and 2010 results. The spike in 2008 (after having likely tapped into a different group of respondents — consisting of bigger wage earners working in larger facilities and managing more people) was the exception rather than the rule. Even with the drop off, however, the 2010 overall average pay figure still beats the 2007 salary survey by $4,809 and the first year of the survey (2004) by $15,283.

By sifting out the hourly-rated employees, we see this year’s salaried respondents followed close to the pattern of the overall average pay, reporting average earnings of $81,790 this year. This is nearly identical to 2009’s $81,628 but well above salaried earnings that were reported in surveys from 2004 through 2007.

The question of raises proved to be most interesting. While respondents faced low to no raises, they remain optimistic about the prospect of future pay increases. But first the bad news: the current survey shows the lowest-yet percentage of maintenance professionals and other plant workers who received a raise in 2009, sinking below the halfway point at 48.8 percent (down significantly from last year’s low of 61 percent). Thankfully, those who did get a raise reported a higher average increase than last year’s lowest-ever average increase (2.62 percent) at a rate of 3.42 percent, more closely resembling pre-2009 numbers.

The saving grace of the numbers is that they met expectations, however low they may have been. In 2008 and 2009, less than a quarter of respondents anticipated raises (12.1 and 24.5 percent respectively); so once 2009 and 2010 hit, our readers reported less-than-stellar pay increase numbers. Now, with a larger number (43.4 percent) of this year’s respondents anticipating pay jumps, it bodes well for 2011. But we shall see. Respondents unsure about a raise made up 37.5 percent of the total group.

This is, in fact, the year of greater expectations. Are respondents concerned about being laid off? If they made it through the tough economy unscathed, this year’s survey numbers point to that possibility. A total of 14.7 percent of respondents ($73,137) said they’re concerned about being laid off. This is down from 19.2 percent in 2009. The richest group, with those not concerned about layoffs ($83,991), make up a total of 65.1 percent of respondents, a jump from last year’s figure of 54.7 percent. Those respondents ($71,667) who said they’re unsure about their continued employment made up 20.2 percent of the total group. This is up from 14.8 percent reported in the same category last year (and relatively even with 2008’s 18.6 percent).

The bad news came with the hourly workers, whose salary fell from the previous year. Hourly unionized and non-unionized respondents reported earnings less than last year’s (which were the highest recorded dating back to 2004). These respondents, however, are not necessarily full time.

The proportion of men to women who responded to this year’s survey (86.4 percent men to 13.6 percent women) is down when compared to last year’s report (94.2 percent men to 5.8 percent women). Once again, men were paid on average more than women ($83,045 versus $53,826), but the female salary numbers are down significantly from the previous year’s. Compared with the overall average pay ($79,740), men earned 4.1 percent more and women made 32.5 percent less.

André Voshart is the editor of PEM.
Print this page