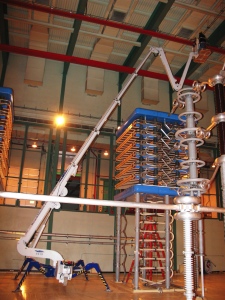 It doesn’t take an engineer to realize that many large, expensive electronics go into the building of an electrical converter station. It does, however, sometimes take an engineer to figure out how to maintain the various equipment and monitoring systems that keep such an operation running. As is the case in many types of facilities, maintenance is typically a non-factor in the design process. In fact, it doesn’t even cross the mind of most architects. It simply becomes an afterthought, left to the facility managers and engineers to solve. Therefore, the process of speccing maintenance equipment becomes a difficult — and sometimes nearly impossible — task. And for Manitoba’s only electric utility, it literally became a tall order.

Serving 527,000 electric customers throughout the province, Manitoba Hydro primarily generates hydroelectricity. Most of the utility’s large dams are located in the far northern part of Manitoba on the Nelson River, which flows into Hudson Bay. Since the majority of the province’s population lives in the southern region, the utility uses a high-voltage direct-current (HVDC) system to transmit power across the province. Manitoba Hydro has two large terminus stations in the HVDC system — Henday in the north and Dorsey in the south. The Henday station converts the hydro-generated electricity into DC power; the current then travels 550 miles to the Dorsey station outside of Winnipeg, where it is converted back into AC power.

When it comes to maintaining the stations, the biggest challenge for both facilities lies in the thyristor valve halls, which are filled with tall valve stacks that convert the electricity between AC and DC. In these halls, the maintenance personnel must access fire detection systems, air systems, heat sensors, cranes and other equipment mounted on the 65-foot-high ceiling.

Since the construction of the two HVDC stations more than 30 years ago, Manitoba Hydro had used a basic aerial lift at each building to access and maintain some of the equipment. These lifts had the capability to extend 65 feet vertically and straight out 18 feet. The lifts reached the end of their service life in 2008, and Cam Frank, engineering technician and thyristor valve specialist for the Dorsey station, was faced with a decision: have the existing lifts refurbished or search for two new ones. After being given a pricey estimate to refurbish the old units, Frank decided to look for a new solution. 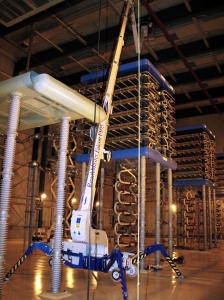 The process kicked off when Frank’s associate began searching for various compact lift manufacturers. Compact aerial lifts, unlike traditional vertical lifts, are capable of reaching up, over and behind tough obstacles in buildings. Their outreach abilities combined with small frame and light weight provide a solution suited to many industries.

In order to be considered for Manitoba Hydro’s facilities, the compact lifts had to be versatile, safe and CSA approved. Another consideration was that the equipment had to be completely electric powered. Because the sensitive electronics in the thyristor valve halls dictate that the facility sustains a clean-room environment, the lifts couldn’t even be powered by clean-burning propane.

Through the speccing process, Frank discovered one compact lift that seemed to directly address Manitoba Hydro’s challenges: the Falcon-series FS95 from ReachMaster. When comparing the new find with his old machines, he said, “ReachMaster could access the same areas and more … much more.” Its 95-foot work height could easily reach the 65-foot ceiling in the stations’ thyristor valve halls, and its maximum outreach of 46 feet demonstrated more ability than the old lifts.

Frank was impressed by the FS95’s double jib, which features two fully articulating, 10-foot jibs at the end of a telescopic arm. Even more, the unit’s compact frame, capable of fitting through a mere 2.6-foot-wide door opening, allowed it to manoeuvre the tight quarters of the facilities.

The FS95 design had already received CSA approval, but to ensure it was the right machine for the job, a number of blueprints and building drawings were submitted to ReachMaster’s specialists, who analyzed whether or not the lifts could access all areas. A demo of the two lifts at the facility resulted in the design of a special lifting device to help transfer the lift between different floors. After manufacturing the devices, ReachMaster delivered two FS95s — one for each terminus station.

When finally put to use, the lifts proved their versatility as they easily accessed all the tight spots needed to maintain various equipment in the thyristor valve halls. Additionally, the crew could now use the FS95s in lieu of scaffolding for installing new electronics and other equipment in the halls. Beforehand, the time-consuming scaffolding process often required some electronics to be shut down for a while during the process. The lifts, on the other hand, could complete the same tasks in a much quicker time. “We like to keep the equipment in these halls running as often as possible, so the ReachMaster really helps us with installation,” Frank said.

As well, thanks to the automatic safety and stability system that came with the lifts, they don’t extend beyond safe boundaries — even if the operator tries.

Though it wasn’t easy to meet the tight specs that the facilities required, Manitoba Hydro finally found the right lift to meet its “high” expectations.

Bryce Goodell (bryce@promersberger.com) is a writer for the Promersberger Company. For more information, visit www.reachmaster.com.
Print this page