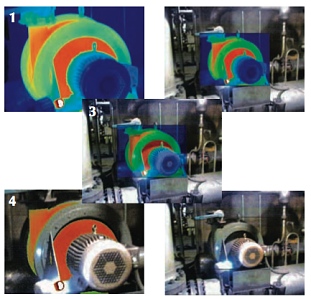 Temperature changes can indicate problems in many areas you see everyday — including electrical distribution equipment, motors, pumps, HVAC and process — so ITM Instruments and Fluke recently ran a full-day seminar focused on an introduction to thermography at the Holiday Inn Toronto Yorkdale.

In the morning, Plastow focused on general thermography theory and camera use. The purpose of the event was to get people “thinking in an infrared way,” according to Green, who took over for the afternoon session, which focused the attendees’ attention on specific building applications. 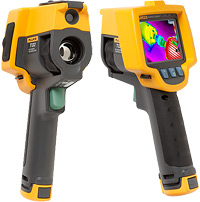 At the beginning, in an informal audience poll, it turned out very few of the more than dozen participants had their own thermography equipment. Plastow delved into the theory of infrared light and, most importantly, material “emissivity” — the relative ability of its surface to emit radiation (in this case, infrared radiation). Different materials emit different levels of infrared waves even if they are the same temperature, an important distinction for a beginner, so they reviewed ways to work with those limitations. For example, polished metals have a very low emissivity while many non-metal materials and coatings — such as asphalt, concrete, tape, paint and oxidized metal — are much higher.

Plastow focused on proper filming technique, reiterating (several times) the important of capturing a focused image. While the Fluke imagers allow users to play with certain factors (such as colour) after the fact, important elements such as focus and distance should be captured on site.

The thorough primer touched on everything from safety concerns (such as being aware of surrounding when using the product, and wearing appropriate protective gear when necessary) to visual examples of faulty electrical panels, motors and bearings through the “eyes” of an imager.

Both experts were available to answer specific questions, and most participants took them up on it. Several Fluke infrared cameras were on hand to demo and try out.

In the afternoon session, Green provided up-to-date information on the use and application of thermography for building diagnostics, including, air leakage detection, insulation evaluation, roof moisture and mold inspections, energy audits and weatherization for both residential and large commercial buildings.
www.itm.com
www.flukecanada.ca