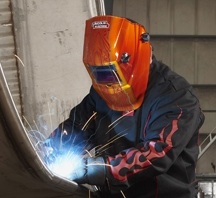 Lincoln Electric has added a second series to its line of Viking auto-darkening welding helmets. The existing 700G Series and new 750S Series helmets are solar powered, light weight and fully loaded with a variety of features and accessories. Both series are built to handle the most demanding work environments. In addition, Viking helmets are designed for applications in almost any industry, including metal fabrication, maintenance and repair, auto body work, farm and small shop.

The 700G Series features a new SlowRider graphic design, as well as the standard black and Tribal models. These helmets also feature a DINS-sized 4.33 x 3.54 inches (90 x 110 mm) cartridge with external nine to 13 shade control. The 700G Series also features magnifying cheater lens capability, variable sensitivity and variable delay, which allows the user to adjust the time required to bring the helmet back from darkened view to the light state.

These helmets are lighter in weight than many auto-darkening helmets. The 700G Series weighs in at 18 oz. and the 750S Series at 19 oz. Both use a solar power system, making it unnecessary to remember to switch a power control on or off or replace batteries.