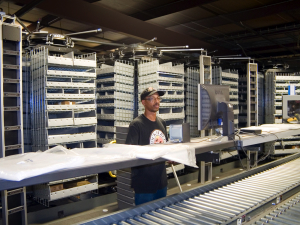 For any large industrial manufacturer handling 13,000 stock-keeping units (SKUs) in its assembly parts warehouse, it’s no small organizational challenge to keep production requirements satisfied without a hitch. Integrate into that system a full-scale aftermarket fulfillment distribution centre (DC) with 80,000 additional active SKUs needing to be processed simultaneously, however, and you have the recipe for a potential logistics meltdown. That is unless you are Gardner Denver, Inc. In the fall of 2005, the company completed the integration of its large, dedicated aftermarket fulfillment centre into two of its production facilities, pulling off the transition in record time and without missing a logistics beat.

Gardner Denver builds large pumps, compressors and blowers for industrial use. The company is a global manufacturer of highly engineered reciprocating, rotary and vane compressors, liquid ring pumps and blowers for various industrial and transportation applications, pumps used in the petroleum and industrial markets, and other fluid transfer equipment serving the chemical, petroleum, and food industries. Its products and engineered solutions are sold through multi-channel, worldwide distribution systems and are used for applications in virtually every market sector, ranging from industrial movement to environmental processes, to healthcare applications and energy production.

Gardner Denver maintained a dedicated aftermarket distribution warehouse in Memphis, TN, which handled its aftermarket parts fulfillment for the domestic manufactured compressor, blower and pump products. The company would manufacture aftermarket parts in its other plants and ship the parts to Memphis. From there, they would be inventoried and then sent out to customers. This system had been utilized for the past 20 to 25 years.

There were potentially sizable benefits, however, to having the company’s aftermarket distribution coming from the production facilities themselves, where the parts were actually being manufactured. Gardner Denver conducted an assessment of its assembly parts needs for its manufacturing facilities, its aftermarket parts needs and lead times required for managing its inventory level.

The decision was made to move its aftermarket parts fulfillment to the plants that were responsible for manufacturing those products, and to close the Memphis DC. This was essentially a change in the company’s distribution model: Gardner Denver determined that it could reduce its inventory costs significantly by combining its aftermarket parts fulfillment with its production warehousing at two of the company’s manufacturing facilities. Instead of maintaining duplicate sets of 80,000-plus SKUs in inventory, it could have just one set of SKUs for each of the two manufacturing sites.

Each of the plants already maintained a warehouse for supplying parts needed for assembly. This was now to be expanded and integrated to handle both assembly parts inventory and aftermarket parts warehousing and distribution within the same system.

The company’s Memphis DC had automated picking carousels previously designed and built by Remstar International that were used strictly to fill aftermarket orders. The DC would receive an order from a customer for aftermarket parts, the picking carousels would house them and the orders would then be picked and shipped out to its customers. Because this picking system proved quite successful in handling the large-volume of 80,000 different parts (mostly small components in the DC), Gardner Denver asked Remstar to again design and build picking systems to accommodate its new warehouse needs in its Sedalia and Quincy manufacturing plants.

"Remstar was intimately familiar with the Memphis site, they visited the Sedalia and Quincy locations and saw what we were doing, and what our vision was," says Dean Chew, director, aftermarket with Gardner Denver. "They came back to us with a complete solution, a comprehensive plan. From the pick system carousels to the conveyers, the interface software between the conveyors and the carousels, the warehouse management system (WMS) and the integration with our enterprise resource planning system, this was a turnkey project.

"They manufactured and installed the carousels, and some of the peripherals like pick-to-light. Remstar also provided the project management on the conveyors, which were manufactured by Intelligrated, the WMS software from Innovative Automation, and the mezzanine structures manufactured by Wildeck."

The picking systems put into place at the Gardner Denver plants needed to serve two purposes: (1) The distribution of spare parts to end users; and (2) the assembly of pick kits to feed the manufacturing floors. Such solutions tend to be quite challenging, and are unique in material handling applications. Remstar was able to design a highly workable solution that incorporated both needs into a common picking system.

Quincy, the smaller of the two systems, handles approximately 5,000 SKUs between its manufacturing and aftermarket parts requirements. For this operation, four Remstar-designed pick carousels were put into place.

Sedalia supplies roughly 75,000 different parts for its manufacturing and aftermarket requirements. Its picking infrastructure consists of 10 Remstar carousels supported by a double-tiered mezzanine; five carousels above and five below.

Carousel sizes within both facilities range from 60 to 80 feet in length, variably adjusted for space requirements.  Each carousel is designed with two, three or five picking pods (the pods can be adjusted to accommodate activity levels through a Remstar system known as Flexi-Pod Configuration). One operator can pick from a pod of two carousels up to a pod of four carousels with just a few clicks of a button. This allows an operator to pick from one active carousel, while the others are pre-positioning to be picked the moment the operator is ready. The picking manager can balance production requirements with personnel to maximize throughput efficiency.

Remstar horizontal carousels are a system of carriers that rotate on an oval track, delivering stored items to an operator on command. The high-density design of these systems uses 40 to 60 percent less floor space and 80 percent less cubic space than traditional shelving. Sedalia had a large amount of bulk rack that was replaced by the carousels, with a considerable recapturing of floor space.

"In our Sedalia and Quincy plants, we now simultaneously do the functions of aftermarket fulfillment and production floor kitting that we did separately before," says Chew. "The production line needs parts to build a compressor or blower, so they enter an order that goes into the carousel, it gets picked and put on a tote, then conveyed down to a workstation on the production line where those components are assembled into a product.

"For aftermarket, the parts get picked, put into a tote and conveyed on a different line out to shipping. Both are the same process of filling the order with similar parts, except they go down separate conveying spurs to different end points."

The picking carousels utilize state-of-the-art, put-to-light and pick-to-light technology that assists the picking operators with four basic functions: (a) picking a specific or active item; (b) putting an item in an active order or location;  (c) communicating a message, such as a quantity and description; and (d) completing the task and moving on to the next.

Remstar combined pick-to-light and put-to-light, with pick-and-pass zone technology to maximize picking efficiency. Multiple orders are positioned above an LED display. The carousel is pre-positioned, so the picker is never waiting on it. All of the orders are automatically downloaded, so when an operator begins the batch-pick process, the software shows the first available pick.

The product is pre-positioned. The light comes on underneath each product to be picked, indicates the quantity to be picked, and that quantity will fill the need for all orders in the batch. The picker then goes to the next carousel, which is already in position and continues the process.

Pick-and-pass order fulfillment allows an order to be consolidated, while picking directly onto the shipping totes. Batches then move from work zone to work zone, bypassing zones with no picking requirements. As batches of orders are completed, they’re routed to the next required workstation until complete and sent to shipping, or to the floor for assembly. Pick-and-pass zone batch picking is one of the most effective split-case picking methods.

"The whole system is quite automated. The coordination of order fulfillment is remarkable. Parts are put in totes, which are sent around the conveyer system to different carousel locations where picking is required to fill an order," says Chew. "When an order has been completed, the system will automatically consolidate those totes and then send them down a single lane for order processing."

Underneath all of this is a sophisticated multi-layered IT structure, managed by Remstar, integrating the put-to-light and pick-to-light systems with the carousels, and with the conveyors. These are controlled by the WMS, which is receiving its ordering information from Gardner Denver’s legacy ERP system. Needless to say, the project wasn’t without some interfacing challenges that needed to be overcome, quite typical for a project of this complexity.

Put-to-light, pick-to-light and the Remstar Flexi-Pod configuration of its carousels have significantly enhanced the speed of Gardner Denver’s entire inventory management process. It can now process inventory in half the time, with a 50 percent reduction in labour hours needed to do the same tasks.

More importantly, with the new distribution model the company is no longer maintaining a dedicated aftermarket warehouse with its thousands of SKUs of duplicate inventory. Its new combined production/aftermarket inventory and distribution system has sizably streamlined Gardner Denver’s DC operating costs.

This is an edited article provide by Remstar International. For more information, visit: www.Remstar.com.