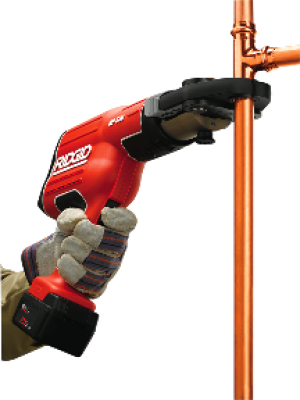 RIDGID introduced the new versatile RIDGID RP 330 pressing tool, adding to its existing line of pressing equipment. The tool is offered in a corded (RP 330-C) or battery (RP 330-B) version. Both the battery and corded RIDGID RP 330 pressing tools make quick connections, with the battery-operated model using an 18-volt, lithium-ion battery to allow more presses per battery charge, says the company. The user-friendly RIDGID RP 330 has a 270-degree jaw rotation and a flattened top, permitting better accessibility in confined areas, says the company. User-friendly indicator and troubleshooting lights provide end users with easy-to-understand indications of the tool’s performance, says the company. The user also receives an audible signal that the pressing cycle is complete. Strategically placed rubber bumpers protect the tool during rough handling and inadvertent drops.