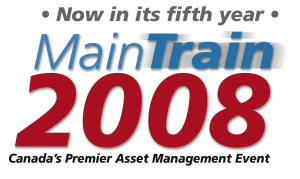 TORONTO-Planning continues for MainTrain 2008, which will be held in two locations: Edmonton (September 25-26, 2008 at the Marriott At River Cree Resort) and Toronto (November 24-27, 2008 at the Novotel Toronto Centre). MainTrain 2008 is developed and produced by the Plant Engineering and Maintenance Association of Canada (PEMAC).